I remember vividly the first time I met Beth McHoul. There were two things that shocked and amazed me. First, her dog - I had never seen a larger animal outside of a zoo in my entire life. McGuire, a 230 pound Mastiff, is not something you'll easily forget. Second, as we talked about running she announced that she runs alone almost every day ... in Port au Prince. At the time I was totally freaked out by Port au Prince and almost nervous just walking from the car to a place of business ... I was still very fearful.

Knowing I was a runner, she asked me to join her the next morning. I did not want to appear as weak/chicken as I was feeling at that moment - so I was all, "oh sure Beth - um-hummm - sounds like a great idea!"

We went to bed and because John and Beth live in a horrifically stifling hellishly hot house I was able to lay awake all night thinking about how scary it would be to run on crazy PAP roads. I imagined many scenarios of kidnapping and attack. I wondered if my kids would miss having a mother. 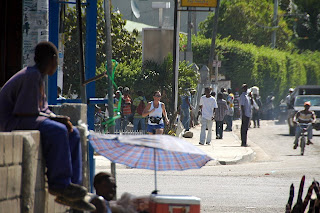 The next morning we were up and on the road by 6:30. I kept wishing my sister (who I ran with a lot the year before we moved) was there to see it. The insanity of it was being wasted - I needed someone who I ran with regularly to SEE it. I asked Beth about all the comments and things being yelled at us. She told me she "did not hear it" - I wondered when she had suffered such substantial hearing loss.

At the end of the short run I felt like I had accomplished much more than any race or long training run ever. I left Beth's house that afternoon feeling like I had a new claim to fame. The "I run in an insane city in the western hemisphere club" or something.

Beth told me to get some pepper-spray and move down to Haiti ready to meet up for training runs as often as we could. I got my pepper spray, but I lived 90 minutes away so it happened only 6 times in two+ years. Instead, I spent an inordinate amount of time on a treadmill staring at a purple cement wall.

Since we moved to the city in August I have forced myself to act brave like Beth - if she can ignore the surroundings, the elements, the insanity ... why can't I!?!?!? I have even forced myself to run alone. I not exactly sure why a 53 year old grandmother makes me feel protected -- but she does! The last two weeks Beth has been gone to the D.R. I have ventured out on my own and lived to tell about it. 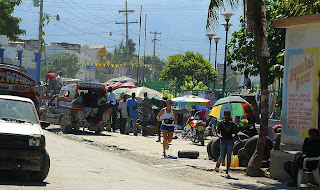 The only way to do running in PAP is to focus in - shut out- and go. Like Beth taught me, I hear nothing, I see almost nothing and I go. *That* is the way you run through the streets of Tabarre/Port au Prince.

Next week Tuesday my former running partner (and sister) will arrive in Haiti with running gear in tow. I am anxious to share with her the ins and outs of PAP running.
at Sunday, November 16, 2008