After the rain has fallen

Things aren't always what they seem, and things don't always go as planned. We live by and accept those truths as part of life in Haiti. God's ways are higher than our ways - to be sure - and here it seems like our ways just never get us anywhere. It's kind of nice, actually, to live in a place where we see God working almost all the time. If He wasn't - well, I'm pretty sure nothing would get done around here.

I recently drove north to visit an orphanage and make arrangements for relief supplies to be sent to some areas affected by the hurricanes and flooding. I thought I was going to deliver food, package relief supplies, and arrange for and oversee vehicle transfers. Exactly zero of those things happened. One delay led to another and another and many T.I.H. moments ensued throughout the morning. Eventually we decided it would have to happen another day. 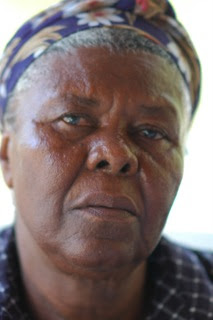 I was all set to turn around and head home, when I overheard a conversation with the woman pictured on the left. She had been living at the orphanage ever since the flooding made her family leave their home in the city of Gonaives. She had planned on returning there to see her home and try to reunite with other family members that day. She was supposed to ride on one of the trucks that never showed up.

I had been upset about my plans falling apart before, but that seemed so petty after seeing and hearing how this woman had been suffering. She was in tears over the news that she could not get back to what was left of her home and family as she had planned. I looked at her packed bags on the ground, prayed, and called Tara to cancel our dinner plans.

I thought I knew why I was there that day, but God had other things in mind.

Madame Bernard Exantus is 68 years old, and was widowed on April 20th of this year. She is the mother of seven children and grandmother of twelve. Her family was supported by land they owned and farmed - about nine acres. Shortly after the death of her husband the government diverted an irrigation canal that served their property in order to build a road. She said the ground is now only covered in thorns. 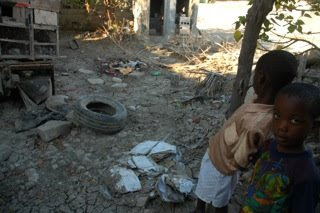 They were having a hard year already - then the storms came. When the walls surrounding their yard caved in from the flooding they escaped by boat before having to move onto the roof. The family was separated and only Mme. Exantus and one daughter were staying at the orphanage where I met her.


Her daughter's name is Ysena Exantus and is 29 years old. She had been preparing for her wedding in December for the last six years. She told me through tears that now 'everything was lost.' I didn't press her to find out more.

I witnessed a difficult exchange before we left to drive them back to Gonaives - they were being counseled and prepared by others - others hoping to help them realize that their home and family might be totally gone.

After a long and rough and long and rough ride, we found their home still standing - a little worse for wear - but mainly intact. The water marks on the walls (the ones that were still standing) from the flooding were five feet off the ground - the ground was now a few feet higher as well from all the mud that was left behind. Garbage and even sewage seemed to be everywhere - but it was a beautiful sight when this grandmother saw her two grandsons playing in the yard as if nothing had happened. They embraced her when we got out of the truck. 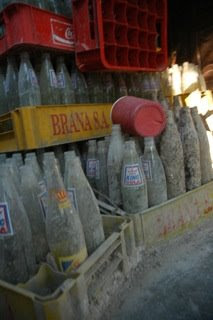 Everything in the home had been completely enveloped in mud - the cleaning process had been underway for days. The house was being emptied of every item and scrubbed. I saw one door that will have to be removed and cut shorter to account for the new level of the ground where all the mud was left behind.

None of that seemed to matter one bit though as I witnessed the joy of this family being reunited. Everyone had survived, and as expected in Haiti - these amazing and resilient people were ready to pick up where they left off - praising God for their lives and health - and move on. 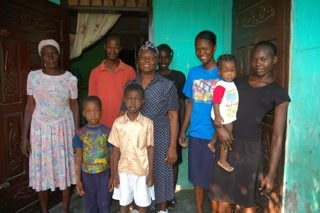