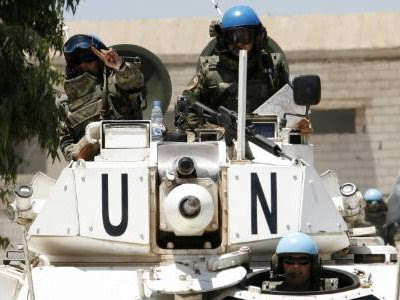 There are varying opinions about the UN stabilization mission in Haiti. I figure mine is both irrelevant and uninformed. But from listening to people (Haitians and expatriates alike) who have been here since the UN got here in 2004 - I would say it is a positive thing overall. (Which is not to say it is perfect.)

Our little boys think giant tanks rolling down the street are every bit as normal as trucks and cars. When we were in Florida early this year for the wedding, Noah asked where the "UNs" were. (UN plural) They also think security guards with sawed off shot guns in fast food restaurants are pretty normal too.

There are 9,070 uniformed personnel in Haiti that are scheduled to continue to provide national and community security until the expiration of the mandate on Oct. 15, 2009. The next important date on the calendar, April 19 Senate elections. Pray for peace and calm and non-violent protests only.