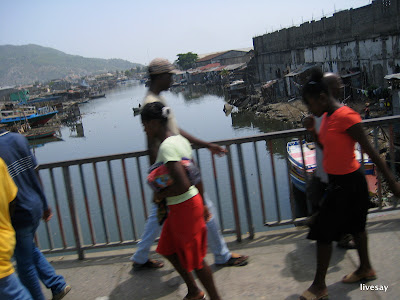 A lady wrote me and asked why I don't share more about Haiti and "less about your kids".

I found that to be unusually bold and exceedingly rude. But I still want to answer her.

Besides the fact that my kids are my number one love in life, and this is not a special order blog,

There are many things that we never write about because we don't believe it will come across well. About 30% of life here is shared, the other 70% is too complicated to explain, unravel, or expound upon. The cultural differences are so vast and off of the radar for most of us, that it is hard to even begin to explain the what and why of many day to day stories and happenings.

Part of the problem is that tone of voice won't translate across the internet. People read and make a decision about our hearts toward the situation or the person. The other part is that some of the stuff sounds so crazy that the reader thinks surely you are making it up!

{For example: We never wrote about firing a lady we liked SO much ... because she was stealing massive amounts of food and would not admit to it in spite of 100% visual confirmation and proof and a desire to allow her a second chance with a confession. And how because of that an entire large family tried to chase us out with threats and how they claimed their voodoo curse on Troy caused his illness and how we were nervous for weeks that they might retaliate in other ways as promised. Three years have past since that happened and it still feels hard to explain!}

People want to correct us on our attitudes toward the story we've shared. Sometimes you get emails and anonymous comments telling you how wrong you are and that if you came to Haiti to help out, you'd better get it right. It leaves us feeling misunderstood and defensive. That's not a cool way to feel. So we try to avoid that.

Yesterday at Women's Program Sheila shared with me that one of our HIV ladies (there are six out of 58 right now) had showed up upset. She is a lady I've written about before. A church in Illinois is sponsoring her and we're doing everything we can to give her a bit of a hand up in life. But the truth is, it seems like this lady cannot catch a break.

She showed up a few months ago to get birth control. As always, before we handed it out we did a pregnancy test ... And she found out she was pregnant. She got hysterical and said she wanted to die. She said the Dad was not interested in her and would not be helping. It was a one-time encounter. (She needed money.) We asked her to give herself some time to settle down and think through her choices.

After a few weeks she came back ready to go get lab work. The lab work showed she was HIV positive. 18 months ago when she was last tested she was healthy. We helped her get started in a program that provides free meds for HIV/AIDS. With some financial assitance she moved into a better house with her children. She began to cope with this crazy-hard new lot in life ... Single mom of many, pregnant, no source of income, newly diagnosed with HIV. She regularly attends many of the classes that Heartline offers.

She had gone to get her meds at the special HIV clinic. When she walked in she saw the man who got her pregnant. That stopped her in her tracks. He was there with another lady and child from our program. *That lady* is his wife. That lady is also HIV positive. There they all were. In one spot. Realizing that he is the one recklessly passing along a disease and making babies. He is responsible for at least two babies and at least three cases of HIV so far. The unborn baby has about a 25% change of having it too. The whole story became clear in that moment. It was a horrible thing for both women.

Writing about Paige, Isaac, Hope, Noah, Phoebe, Lydie, or Annie is fun and enjoyable for me as a Mom/Aunt. Writing about situations that are unjust and seem hopeless - not so enjoyable.
at Friday, April 24, 2009