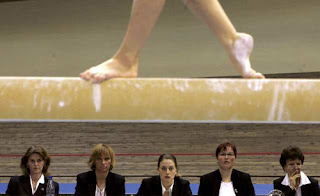 Much can be said for people who are committed to their 'mission field', wherever it may be.
Sometimes the truth is - their commitment to their mission field exceeds their commitment to God and family.
Beth told me early in our time in Haiti that "unhealthy people make the best missionaries".
What she meant is that those who will give non-stop - even to the detriment of their own mental health, and their family, and everything else, are 'better' missionaries because serving and giving is first all the time. They lack boundaries to keep themselves healthy, or take a break, therefore they give more than anyone. They serve and give and serve and give and make the rest of us look like (healthy?) lards.
I've never wanted to give to the detriment of my kids and husband.  I've never wanted a husband that would pour more energy into Haiti than into his kids. I moved here in 2006 preaching that being a growing mom and wife had to be a priority in order to feel good about Haiti.  We've pulled that off for the most part  .... with scattered deep pockets of not pulling it off.
I know my heart toward God can be a big mess while I "do" much.  I believe in my heart that God is more interested in relationship with me than He is in any work I produce.  The trouble is, my head isn't totally convinced of that.
Troy reminds me frequently that God would rather have relationship with me.  That is so much easier to say than it is to live.  I suppose it is pride that makes me come at it incorrectly. I want my work to show ... growing in relationship with Christ doesn't show in the tangible way that working with poor young women does.  In the same vein staying home to be with my kids isn't nearly as glamorous or exciting as delivering babies is.
I share all of that because Troy and I had time in Texas to really evaluate the needs of our kids this summer and we realized I need to back away from the bulk of the other responsibilities and focus on the six (and especially the five youngest) kids.  Instead of doing a lot of things sub-par, I need to try to do one thing well.
We need to be intentional about summer school for a few of them in order to prepare for the fall. Lydia does so much better with a more predictable schedule. Having six at home all day instead of two at home is a fairly major increase ... Going out on a shaky math limb, I'm going to say that is like three times more kids. (thank you Crown College)
The plan is that other than when I leave home for an occasional birth at the Maternity Center and for Prenatal Thursdays  - I will stay with our tribe. Troy will work. He will be the main presence at the Harbor House assisting Brit G. and Magarette. Thursday's when I am gone for program he'll attempt a 'home office day'. (Waiting on a reply from him? Don't look for it until Thursday. Or 2014 if you know him.) With this plan he can leave home each day with less stress knowing the kids are totally covered.
Ugly confession time: The things I need to do this summer, I am not going to find thrilling or be able to quantify easily. That bugs me because my prideful nature wants to have something to show and be in on the most exciting action.
Even though I believe it totally necessary and important, I'm struggling to be at peace and accepting of the summer plan.  I don't like missing things. Truth be told staying home with kids is more personally challenging for me.  My patience skills are underwhelming. The challenge of teaching a gaggle of kids is far more difficult than the challenge of 'ministry' for me. Failing at being patient with kids that I truly, truly adore is sucktacular.
I am praying that God would use this summer to teach me more about the crap in me that needs pruning.
Today as I struggled to remain patient while working with a foul-mood-ed Noah on some school work, it occurred to me that this summer might be as much about changes that need to happen in me as it is about the kids needing close direction and supervision. 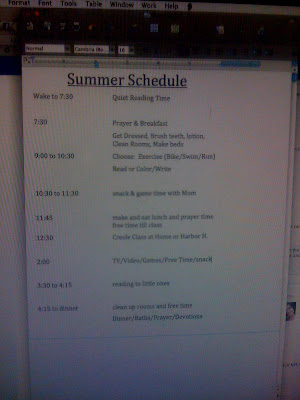 As we entered week two of summer it became clear to me that without a schedule someone (who shall remain unnamed) could go nutso-bananas.   There are way too many needy small people to do this alone sans structure.
We created a schedule which we cannot yet boast has been implemented   .... One day probably doesn't give us license to act like butt-headed braggarts.  In a couple weeks though, if we've stuck to this, we'll be all up in your mix telling you how super structured and awesomely disciplined we are.
Today we swam together and worked on reading, Kreyol, and math and I only wanted to gouge my eyeballs out once.
(One eye-ball gouging ... That is quantifiable!)
We also decided that we will keep track of our running miles logged and add them together to see how much of Haiti we can cover. Since we started a couple of days ago Hope has logged four miles, Isaac two, and I have run seven. (Which would get us almost to Leogane .... and if we ran we'd get there faster than we would driving, but I digress.)
During morning exercise today Isaac declared after about ten to fifteen minutes that he and Noah had run five miles.  I said, "There is no way you can run five miles in 12 minutes. I bet you ran about a mile."  Isaac disagreed vehemently, "Mom, my teacher in Texas told me that four laps is a mile and I just did 20 laps around the house."  A track lap in the ginormous state of Texas and a lap around a urban postage stamp yard in Port au Prince might possibly vary a bit in distance. Don't be swayed by reason though - Isaac isn't.  :)
During today's afternoon reading time Isaac got pretty serious. As it turns out "Magic Treehouse" also has the magical power to put a nine year old boy to sleep.  OR - heck, who knows - maybe he did run five miles. 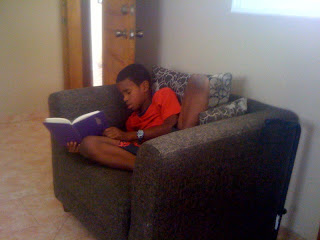 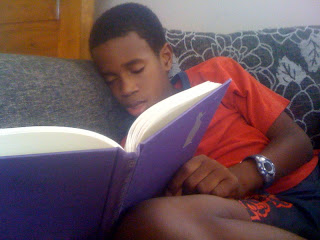 Everyone knows that if you state your goals publicly you can feel like a bigger failure later on ...  I mean, who doesn't love goal setting?
(ahem. besides me.)
Our goals for the summer:
Prioritize well (All)
Improve reading skills (Noah)
Improve Kreyol skills (Isaac-Hope-Tara)
Log running miles (mainly Hope and Tara)
Be patient (Tara)
Be kind (Noah - Phoebe - Lydia)
Pray together daily (All)
Eat Healthier (All)
Start midwifery book work/study (start being the key word ... just start)
Within the goals are more specific sub-goals (learn ten new Kreyol words per day) but one of my sub-goals under prioritize well is to refrain from unnecessary internet time and from over-sharing  .... which requires that this post end now.
at Tuesday, June 07, 2011