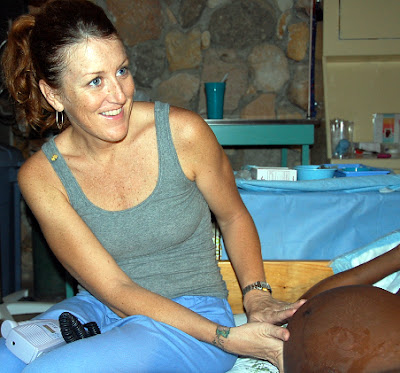 On Thursday during our regularly scheduled prenatal day Jonna and I did Leoni’s prenatal exam together.

Leoni appeared tired and totally over being pregnant. She walked with about as wide a stride as she humanly could. She didn’t feel good but who feels great at week 39+ of a pregnancy?  She told us she wasn’t having contractions. We mentally prepared her that it could easily be another week.

We loved on her a bit and told her she was “preske mi, preske fini” (almost ripe almost finished) . We just encouraged her that it would all be over soon.

Around 3pm Thursday she waddled out to walk next door to the Harbor House where she lives.

Around 8pm Jonna called to say that Brit had called her to the Harbor House because Leoni was vomiting so much.  Jonna said something close to: “I’m thinking this is early labor although it doesn’t make sense for her to be puking like this in early labor, unless she has a flu, but she doesn’t seem to be having contractions.”

Troy and I were finishing up the chaotic time where we pretend we’re having a devotion time with our kids but really it is more just shushing the little ones and listening to Pastor Isaac pontificate on deep spiritual things until we get around to praying. When that is finished we tuck them in and do a celebratory dance once all five have asked for their last glass of water and their last kiss and their last hug. All that to say, I told Jonna we’d get our kids down and come get Leoni at 9 to have her sleep and labor at our house.

Troy got Leoni a bit before 9.  She puked right before she got in the car and right when she got to our house.  I helped her shower where she puked two more times. We gave her Zofran (awesome drug that we are madly in love with) but the Zofran didn’t do a lot for her  - it gave her fifteen minutes in between puking instead of five though, so I guess there was that.

We had been on city power for a while so we were able to cool our room down under 88 which is a major treat.  We had Leoni come lie down on a mattress on the floor of our room.  She wanted to sit.  She got up, she paced, she sat down.  She repeated the same a few more times. She went to the bathroom frequently and I followed her.  After a while she sat on the floor on the edge of our bed with her head on the bed.  She couldn’t deal with the top half of her clothing anymore, so she got rid of it.  I looked at Troy and shrugged. I must have been asking a question with my look because he said, “It’s fine. I live in National Geographic Magazine.”  He left the room. She went about being her quiet self, never making a sound, never answering my contraction questions with “wi”.  She seemed miserable but not that kind of miserable that we’re so used to seeing at late stages of labor.

I sat on the bed and quickly posted the blog asking for prayer for Leoni.  I chatted with her but she really isn’t a talker and she gives an occasional polite “wi” and not a lot more.  At ten after ten she quietly said, “There is water. I have water.”  I walked around to see that her water had most definitely broken. I called Beth and Jonna and told them I thought we should head over to the Maternity  Center.  I coached her a bit and told her I thought we should start getting ready to head over to see Beth and Jonna. Around 10:30 we got out of our house. As we left our upstairs she needed to stop walking during contractions and just hold still. Leoni was moving pretty slow so I didn’t push her much.  In the driveway Troy said, "Do you want me to come with you?"  I teased him that we could probably go it alone. He said "Well, I don't know, I just thought maybe you would need me." I asked him to clean up the amniotic fluid that was soaking into Noah's school work under our bed instead. :)

When we got to the Maternity Center Leoni was dialated to 8cm. She got there (to 8cm) without screaming, crying, wailing, or complaining.  She got there by puking and and saying very little.

She continued on very quietly laboring. About 11pm we could tell when she was having contractions because she would want me to rub her stomach during them. Later she would hug us with a vice grip around our necks during contractions. With most women you can tell how intense their contractions are because they are cursing, begging God to stop their suffering, or just plain screaming. Not Leoni. There has never been a quieter labor in the history of womankind. 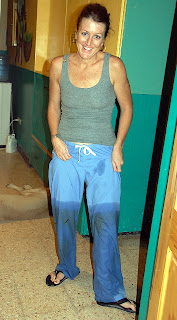 At shortly before midnight her body was clearly pushing, Beth checked her and decided she was safe to push and had dilated to 10cm.   With each contraction she would push, but again, without making a sound.  At 12:22 a beautiful little boy came into the world.  With experienced midwives on either side of me, I was very blessed to be the lucky one to catch him.  I got soaked in amniotic fluid from the knees down and couldn’t have cared less, it was too precious and special to be a part of Jocley’s welcome into the world to care about bodily fluids or wet pants.

After delivering Leoni’s BP went higher, and higher. Her bleeding was heavier than normal. Jonna knew we needed to intervene and got busy getting Leoni on an IV and we called Dr. Jen around 1:30 am to confirm things with her and get dosage advice.  Jonna gave Leoni IV meds to bring her BP down. She was also given pitocin to slow her bleeding down.  There were a few tense middle of the night hours while all that happened.  Leoni slept through most of that action and we helped Jocley latch on to his Mama while she slept. 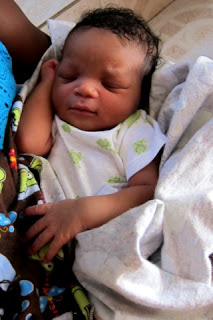 By mid day Friday Leoni's BP had come back down into the normal range. She came back to our house for two nights and returned home to the Harbor House Sunday after church.

She still has had very little to say, but that's Leoni.

Thank you very much for your prayers for them both.  We appreciate them so much.

The Harbor House is settling into a rhythm and things seem relatively calm right now.  Maybe that is easy for me to say since Troy is the one dealing with any drama but there seems to be a bit of a lull in the drama department. (I mean besides the barfing and birth.)

Enisse and Sophia moved back in ten days ago. Enisse came asking for another shot at it right before we left for Texas so she had to wait till we got back to move in, she made it just before the heavy rains and surely missed out on lots of hardship living in her tent.  We're grateful she thinks she can live by the (not very difficult) rules.  Now we just pray she can.  Her return means we have six teen mamas ranging from 15 to 19 years of age. Four of them have boys and two have girls.  I have no other stats for you today.
at Tuesday, June 14, 2011