A post in which nothing is related - some items are serious, some are stupid, and most are over-sharing...even though I said I won't be over-sharing.

Leoni, from the Harbor House, is due to deliver her little one Friday June 11th.  That also happens to be a very special day for this one dead sexy guy that I know. We're hoping Leoni's baby comes on the due date so that we can celebrate the old(er) man I know along with the bouncing new baby. No matter which day this goes down, we're asking for prayers for Leoni and her labor/delivery. I've long had a sense that she is a person carrying many secrets and hurts. The pain of labor could be really difficult for her.  She is near and dear to many hearts here. We'll let you know when labor starts.


~~~~~~~~~~~~
The rain brought so much destruction.  I don't exaggerate when I share that a regular little 20 to 30 minute rain can cause flooding in the streets. So when it rains night after night and harder each night  - bad things happen.  Power is out in lots of places (our area included) and the roads - they may as well be rivers.  During rainy season it will often rain every night.  What is going on lately is unusual because the cloud cover for so many days in a row is almost unheard of for Haiti.  I'm no meteorologist but I'd say a system is stalled out over these here parts. It needs to leave already. 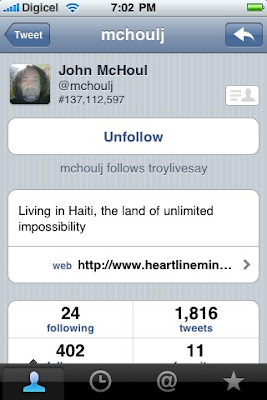 A campaign to convince John McHoul to change that horribly scary and intimidating profile photo on Twitter is being launched now.

The question is, are you willing to help?

Please tweet @mchoulj and suggest other options for him. Perhaps more people would support Heartline Ministries if they weren't so afraid of the freaky looking-guy at the helm.

Netglow - Someone (or something) that is better online than in real life.

Sentence: I've met him in real life. He is really below average without the netglow.

Fact:  This has been said dozens of times about us. If we ever cross paths and you find out we're regular ordinary joes - don't say you were not warned. 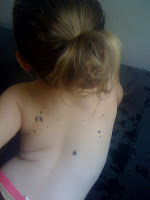 This snippet is about first world woes (because I am pretty sure a lot of people would love to have a crappy quality leather couch to talk about). The back story is that in 2007 we bought this stuff in Haiti at an upscale furniture joint right near the U.S Embassy.  It was a rip off of epic proportions but we had resorted to sitting on the tile floor because the fabric couch had some sort of bug and dust infestation that grossed us all out too much. I would estimate that we paid 2.5 times more here in Haiti than what it would have cost at Ashley Furniture. That's the price of doing business here so we sucked it up and reasoned/justified by declaring that 'leather will last forever'. 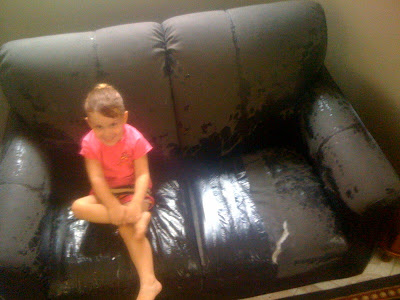 The couch, loveseat and chair are all trashed beyond recognition. When visitors leave our house they usually have black pieces of our couch attached to their rear-ends. Apparently DEET bugspray on your skin will eat the finish off of cheap quality leather when you sit upon it.  Once that happens it is also apparent that kids jumping on the leather will cause it to split wide open in places. Our side project for the week is to completely finish duct tape covering the entire love seat.  The good news is- duct tape, when applied with care and skill, DOES last forever.


~~~~~~~~~
Question:  Can anyone speak to me on the reliability of "Insel Air" and fill me in on the scene with them?  If the goal was only to get between Florida and PAP is that option a good one?
Spirit Air started out as a good thing .... we once flew to FLL for a weekend for $103 RT ... the good fares all ended in year three. I boycott them on principle now because they are so smutty and stupid and cliche in their advertising that I cannot ever bring myself to give them any money.  Today their promo email said "Want to see our weiner?" Oh. Yes. They. Did. The rest of the ad was more predictable. And dumb. Their advertising has been like this for a few years. One campaign causing more disgust than the next. They are mos def the trashiest  airline in history.  I am guessing there might be poles and dancers on their planes by now.  I know not a single person that is employed by that airline and I'm embarrassed for them, embarrassed on behalf of perfect strangers.
Dear marketing manager at Spirit Air-
Please go finish the 8th grade.
Warm Regards,
T.
~~~~~~~~~~~
Day two of "Be focused with some goals" went pretty well.  Noah (and then Lydia) are the 'button pushers' of the house and they played their roles well.  Big congrats going out to both of them. We learned 16 new Kreyol words, read from the Jesus Story Book Bible, played games, did a workout together, made a real dinner, lined up every car and truck we own in a long caravan.  Such a blast I tell you.  Sarcasm as a coping tool.  Please allow it.
Dropping the sarcasm. I got a beautiful email from a kind woman that lived many years here and she validated me and made me feel less craptastic by admitting that when she was in Haiti with three young kids she too would have totally picked being out in the thick of the action and interacting with Haitians over interacting with her kids. She shared that she had to let go of what she wanted to do and do what she needed to do.  I don't know why it mattered so much to me to read her email, but it did.

You don't typically envision moving to a foreign land only to do what you could have done in air-conditioning without the swarming mosquitoes and with a few parks and wide open spaces nearby.  Here's what I know: If Noah is reading well by the end of the summer there is going to be some sort of epic celebration ... Because if he is reading well, he is also alive and that will be quite impressive. (I'm mostly kidding.) I'm going to make the most of this and try to be more like another mom, a mom I admire ...  And ... I am also going to be really excited for prenatal Thursdays.
~~~~~~~~~~~~
The Chinese generator we bought in '08 has decided to quit working. The thing is junk. (No offense China.) It has always been something that incited much mocking because John McHoul figured out early on that it was maybe a dumb purchase and it is so loud that you cannot hear yourself think when it is running.  He tortures Troy about that blue beast of a generator.  Because the storms and water knocked out EDH Troy was motivated to try to get the generator going. He loves us and wants us to have fans at night. He had to take a loaner generator but then that required much rewiring, which he handled like a champ. At one point in the evening he declared that he was about to "win the degaje Olympics". I don't know if that's a thing.

Troy says yes. yes. it is a thing.
'Degaje' is basically making something out of nothing, finding a way to make something work.  He was employing every ounce of skill Haiti has taught him. Earlier in the day he even rigged the battery in our truck to stay in place by using old electrical wire to tie it into place so it stops wiggling free from the battery cables.  Impressive. 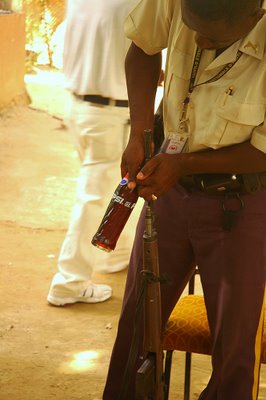 Still not getting what degaje is? Another example ...
No bottle opener? No problem.This is a perfect example of my favorite part of Haitian living: After a quick beverage and some misuse of firearms, our visitors sped away.
In most situations things don't go as planned, you don't have the right tools, the right people, the right paperwork or the right attitude to complete your daily tasks. When this happens you do what the Haitians do, which is to "make do" or to make it work - known as - degaje (pronounced d'egg - ah -jay).

If one word were used to describe the way of life in Haiti, it would be - degaje.