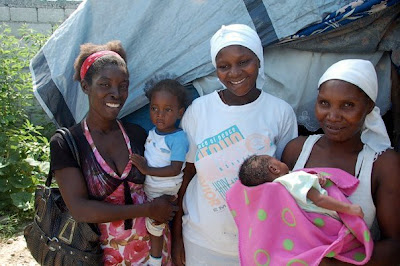 I just read a quote by Kathleen Norris that so applies to Haiti:
“If holding your ground is what you are called to most days it helps to know your ground.”
We’re holding on. We’re fighting for our women. We’re fighting to get through the day not totally frazzled. Just getting to the program this week has been an adventure and exercise in patience, driving skills, map reading if there was a map, leaving the house not realizing that a one minute drive now takes up to 45 minutes. Avoiding the holes in the road, chatting politely at the police check, not yelling at the driver of the huge truck blocking the way and staying to the right enough to keep my new mirror from getting knocked off again requires some patience. The route we take has become a lake at one point due to broken water pipes and now it is a blocked lake. The detour street is wide enough for one vehicle but has become a two way thoroughfare. That too was blocked this morning so a roundabout road had to be taken. That road tends to have police checks that further delay traffic.
As always in our program we have huge success and painful losses. Babies die before they are born because mom is malnourished, doesn’t eat enough or goes to the voodoo healer to start labor. Babies die after they are born because they go home to a house with bad conditions and extended family insisting the baby be bottle fed. Sometimes they die because they are born too early and too small.
Success comes in the form of fat babies and moms who are courageous enough to make changes in their lives.
Over the past two weeks we have had a 100 pound 17 year old mom deliver a tiny baby who died several days later. Another 19 year old who had delivered with us a year ago had pains in her stomach and died two days later leaving a small boy crying for his mom. We had an 8 month along pregnant mom who decided she was done with being pregnant. She went for an aggressive massage and came to us later that night. The baby within had died. Just a few days later we delighted in the fact that one of our sweet moms might be having twins. She was accepting of this, was open to the news. It ended up being one baby that died and a mass. Such sadness. Things we can’t control or change.
We grip onto our successes and breathe them in like fresh air. Our sweet teen Leoni gave birth in her quiet, gentle fashion and is such an attentive mom. Success! On Tuesdays our room is full of women who have gone through our program and boast healthy babies. They parrot our information like students who have memorized for an exam.
We know the ground we stand on. We know that culturally breast feeding is misunderstood and disdained.  We know that traditionally women are mistreated and abused.  They don’t have a lot of say in their lives.  We know that when push comes to shove many times superstition wins.
Go here to read entire post ...
at Tuesday, June 28, 2011