Whenever I go all Debbie Downer on the worldwideweb and post two serious things in a row, we receive sweet encouragement and words of concern.
Thank you. You are so kind.
Please know, we're all good.  The trips between the two places, one where we see people we love in great emotional pain and one where we see people we love lacking so much materially and physically - well - it doesn't help with the crazies. Suffering isn't reserved only for Haiti.
Additionally, it has been raining for four days in Port au Prince and the mud and muck are enough to cut everyone down a notch.  (This says the person that lives in a dry house.) But, maybe that plays into the woe is us blog entries.
Here is the thing ... our struggle with this crap and our 'faith crisis' (if that is what you want to call it) started long ago and won't likely end soon. Lacking perfectly packaged pat answers is okay with us. We know a lot of people have them and want us to have them, but it is okay. Really. It is.
We're not expecting to have all the answers to all of the questions in this life ...we're expecting to wrestle. The answers themselves won't bring peace anyway - only He will. It has to be enough that we know the One with all the answers.  We know the One that has overcome the world.
Fact: Jesus said,  "I have told you these things, so that in me you may have peace. In this world you will have trouble. But take heart! I have overcome the world." John 16:33
We can (and do) occasionally stop struggling just by remembering that one day all that's divided will be whole again, one day death will retreat and wave its white flag, one day love will defeat the strongest enemy.  So we wait for that one day. Come quickly.
Enough of that. I'll lighten the mood  ...
The thick cloud cover and near constant drizzle is annoying.  The road conditions went from atrocious to uber atrocious. We are sun addicts that don't know how to act with three days of rain. The puddles are so giant that if you need to go somewhere it is best to plan to walk in deep water and not think about what disgusting little organisms reside in said puddles. 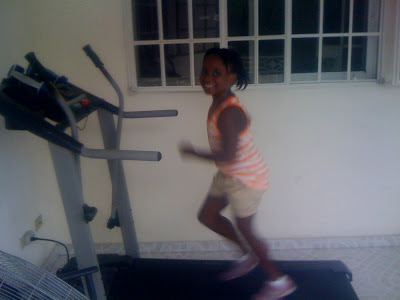 Yesterday I ran a few miles on the super-reliable-has-not-broken-for-5-years Sears dreadmill to attempt to bring some light to my brain.I cheered right up. Upon seeing this Hope decided to give it a try. She ran two miles without stopping.  This morning she ate breakfast and jumped back on the mill for another two mile run.  It is adorable, this girl was born to run. In the spirit of competition Isaac gave it a try.  Let us just say, not pretty.  Arms and legs flailing everywhere.
2011 will go down as the year of fighting off old for me. The number of gray hairs and wrinkles have duplicated tenfold. I stocked up on every wrinkle reducing moisturizer known to man while in Austin last weekend. I'm fighting it every step of the way stopping just short of begging Troy for Botox.
The thing is  -  in my heart I feel very young.  The exterior isn't agreeing with my heart.
Right around Christmas my knee started giving me nagging pain.  I've been running since 2004 and I knew this was different. It is not an injury.  It doesn't get better with rest and it doesn't get a ton worse with continued running. I am no Doctor but I have some friends that are. (So just a step away from being one myself.) I'm sure they would agree with my google findings. It is arthritis. I have near constant aches in one knee and it gets so stiff in the night that going down steps in the a.m. looks super dumb. Also, just like some ancient old man, when it rains it aches more.  (Did I mention it has been raining since we landed Wednesday?)
I thought my battle against aging was on the down-low but apparently people in my family are picking up on it.  Today I was in the kitchen making eggs and french toast when a wild Kirk Franklin song came on I broke into a funky dance and Isaac said, "Momma, you might think you're old - but you sure know how to party!"
Later I asked, "You think I am still kind of young?" He said, "Yes, I  KNOW you are still young because even though you are 38 you still have all your teeth."