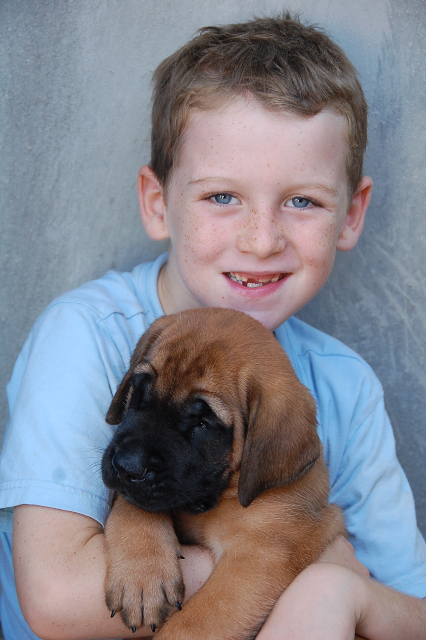 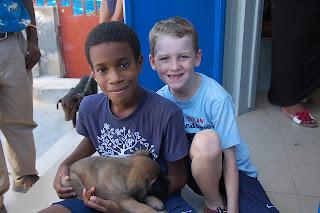 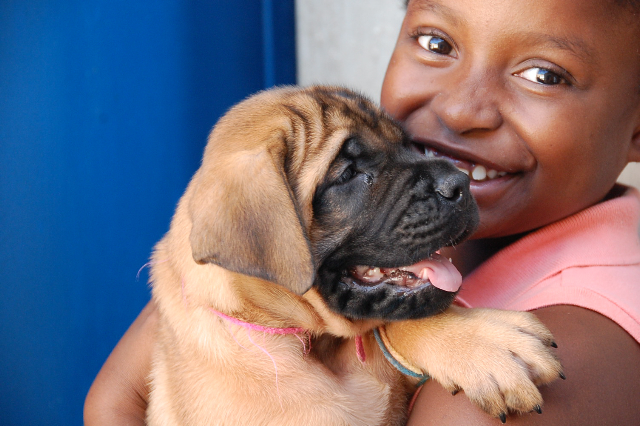 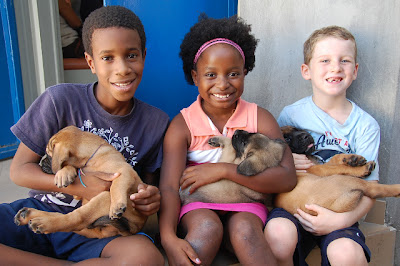 The kids and I heard Beth needed to take the puppies for their six week vaccinations so we eagerly asked to help her.  The kids asked because they love the puppies.  I asked because I love the entertainment.  Between watching Beth and her  liberal use of her camera and watching the others in the waiting room,  the three hours went by quickly.

In the waiting room there are more people and animals and weird things to observe than you can even begin to imagine.  It is people watching at its best. The Minnesota State Fair has nothing on this PAP waiting room.  Add Beth McHoul to the mix and it only gets better.

In true Haiti fashion there is no system in place to help the patients flow easily in and out of the Vet's office.  There are no numbers, no lines, no front desk person to write your name on the list as you arrive.  There is no one to speed up the end of the process by taking your payment or filling out your records.  It is truly inefficient in every way.

Instead each person arrives, takes a look around the room at the dozens of other customers waiting and mentally notes who all has arrived before them.  Each time the vet's office door opens everyone moves toward it arguing that they were next.  Some speak French, some Kreyol, a few speak Portugese and others English ... but all argue authoritatively that they are in fact next in line.

Because I went along knowing it would be a ridiculous show  - none of it bothered me.  The man with the angry hissing giant cat that went in front of at least four people that had arrived prior to him just made me laugh.  If you act 100% indignant and certain that you were next, it is a game changer.  He did it with great skill, props to him for being an awesome actor.

Beth tried to talk two large and blinged out sisters into allowing us to go before them because the "puppies were getting hot".  I put my head down and pretended not to know her at that point.  After waiting from 9:10 am until 12:15 for our turn in the office the second portion of the show began.

Beth is a dog lover.  If you have any question just check her FB photo albums. She has one album of dog photos for every album of human photos. (Alright. Fine. I'm exaggerating. One album dog for every two human.) Have you ever been to the vet with your pet and witnessed someone taking dozens and dozens of photos in the waiting room?  Yeah.  Me either.  Until yesterday. We joked on our way up the hill to the vet that next time around she will require home-studies before she places her puppies into families. If you cannot prove that you will cook your dog hot, fresh, high protein meals forget about it. You're not getting a dog from Beth.

This vet and Beth have some history. Once Beth called him in the middle of the night to come deliver puppies.  He hung up on her.  The personality of the vet is about 50 time less upbeat and friendly than Beth's personality.  She walks in all chipper and cute and full of questions. He finds ways to answer almost none of her questions.

Here is how one portion of the exchange went down:

Beth :  So when can they go outside?  When will it be safe?
Dr. W:  (silence)
Beth: You know like when will they not be at risk?
Dr. W: (more silence)
Beth: I don't want them to die of Parvo, that is a terrible way to die.
Dr. W: (finally speaks) You don't have Parvo in your yard do you?
Beth: Well years ago, yes, some puppies died.
Dr W: Years ago.

That ended that section of questions.  Dr W. never told Beth when it would be safe for the puppies to go outside. It went on like that until we left.

The puppies go back in two weeks for their eight week shots.  You can be sure I'll be there for the show.