I want to write in grand, sweeping, graceful terms that are beautiful and artistic. I want to do justice to the stories and the strength of the people we are blessed to live and work with every day. Instead I get frozen and usually can not find words to accurately depict the situations we find ourselves in. That is why I do not write here very often.

The last time I wrote I believe it was the story of a nineteen year old girl suffering with AIDS and seeking testing/treatment for tuberculosis; that was many months ago.

It has been a long and difficult six months for that young woman. The initial test results were negative for TB. She was admitted into a program to receive HIV meds, requiring monthly visits. These visits became increasingly difficult as her body weakened and each trip was painful and taxing. She did not always make it to those appointments, sometimes she was just not willing to face the challenge of fighting for space on public transportation and being ridiculed by fellow passengers. Her condition has deteriorated greatly. Further testing was done with another program in another hospital and it was determined that she does indeed have tuberculosis. 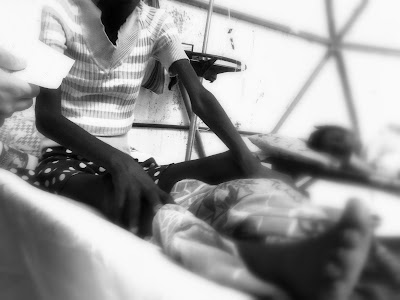 Fortunately...and it is very hard and disturbing to say that this is fortunate...she was sick enough to be admitted into the inpatient TB ward, which is a large dome tent in a gravel yard. This is the best option available. I am thankful for it, and so is she. Prior to the cot she is currently sleeping on, she was laying on a foam pad on the floor of a dark cement block room. It was a cramped interior room of a crumbling building surrounded by crumbing buildings and a few family members that had no idea how to take care of her and little means to do so even if they did.

Her tiny frame is too weak to stand and walk at this point. Coughing racks her body. The few family members and visitors she received when she was first admitted have dwindled and rarely come now. She has slept alone the last two nights.

Here is where the words really start to fail again...trying to find a way to describe the emotions involved in visiting her and sitting next to her bed...seeing her smile...hearing her say "with Jesus I will be well"...wondering if that means here on earth with her faith in Jesus or literally when she sees Him - which seems like it may be any day now. She says her nightly routine is to read some hymns that she is too weak to sing, then read 'her Pslams'...to 'keep them in her head' for when she falls asleep. I wonder if she does that in case she doesn't wake up. I wonder why I don't do that as well. I wonder what 'her' Psalms are and remind myself to find out and write down the ones that bring her hope in the midst of such suffering. I think about how blessed I am to see such faith and hope and know that surely she will dance in heaven and be fully alive again...and I struggle to decide if living here much longer is the right thing to pray for on her behalf. I want her to heal and be restored, I just don't know if it wouldn't be better to go and do that at home in heaven.

The staff of the hospital say that she can stay as long as needed to heal - this is an unbelievable blessing and rarity in the health care 'system' here.

Her appetite is coming back slowly, and now she calls almost daily with specific orders for the food she would like that day. I confess to being irritated by her picky requests...and then instantly more irritated and disgusted with myself for thinking that way as I sit in a comfortable house or lay in a real bed or drive in a car with money in my pocket that can ease her suffering at least a little bit. It is an uncomfortable place to be. Not in a million years will it compare to the discomfort she is feeling and handling with such grace. I am a jerk. God is using this girl to get through to me. I feel like a really big jerk for needing a lesson taught in this way.

Twice now thieves have taken money from her bag while she slept. The money was left there for her to buy juice and other food. I am outraged and incredulous;  she tells me with a chuckle "I don't think God will answer the prayers of someone who steals from the sick like that." I try to laugh along with her.

Please pray for K, for those attending to her, that we find someone to stay with her at night, and for all of our hearts to be changed by the joy she has in her tribulation.

2-4Consider it a sheer gift, friends, when tests and challenges come at you from all sides. You know that under pressure, your faith-life is forced into the open and shows its true colors. So don't try to get out of anything prematurely. Let it do its work so you become mature and well-developed, not deficient in any way.

5-8If you don't know what you're doing, pray to the Father. He loves to help. You'll get his help, and won't be condescended to when you ask for it. Ask boldly, believingly, without a second thought. People who "worry their prayers" are like wind-whipped waves. Don't think you're going to get anything from the Master that way, adrift at sea, keeping all your options open.
at Monday, January 30, 2012