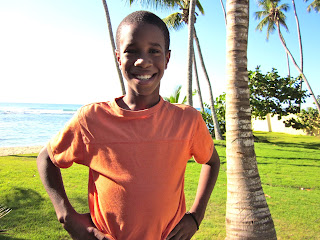 Isaac is bouncing around here very excited about his new writing gig.

He printed off the questions and is answering them as time allows in his official spiral notebook.

He asked me tonight, "Can you believe those people want to know so many things?"

We talked about the long summer stretching before us and the lack of excitement during the summer in Port au Prince and we determined that Isaac has enough questions to warrant his own space to answer them whenever he feels like it.

Because we want to keep it authentic Isaac, we'll only help him when absolutely necessary. He has decided that he'll answer the questions in no particular order and publish an answer most days throughout the summer. We'll either scan in his handwritten answers or help him type them as he wrote them.

Hope and Noah are mainly disinterested but say they'll help him when he asks.

We "speak Isaac" and often know what he means when others don't, but we'll allow him to communicate his way and hopefully you'll eventually track with him when he says things like "I was born September 18, 2001, close to a tragic moment."

As Troy tucked him in tonight Isaac announced, "Dad, I've got my own dot com now!"

Thanks for helping us create a fun summer activity!
at Sunday, May 27, 2012