Yesterday I declared that we would be doing a mixture of school work and house work, heavy on the housework. There is a collective rolling of eyes when that sort of announcement is made.  I figured that with Dr. Jen in the air headed our way for the month of June it was a good time to make things look nice.  Jen is the ultimate organizer and I like to pretend I understand her ways.

Hope quickly saw her opportunity to escape me and my plans for her life and she asked Troy if she could go with him for the day.

As I cleaned and sorted and organized and made piles of things to give, toss, and purge I performed my usual song and dance saying all the crap my kids have heard me say no less than seven hundred times.

"You don't take very good care of your stuff."
"I'm not buying you anything new again."
"Why don't you keep things that belong together all in one spot?"
"This doesn't go here, surely you realize that?"
"Food? In your closet? Why!?!?"
"DVDs that are not in their case get scratched and ruined."

Somehow I ended up with a lot of pack-rats in one house. Isaac keeps EVERYTHING. Hope might be worse.  Troy likes to keep broken electronics. We agreed that all their weird treasures (pop bottle tops, scraps and unidentifiable bizarre odds and ends) need to fit in one small bin.  When the bin is full it is time to pitch.  I don't have any idea where all the stuff comes from in the first place.

They seem like they've figured out how to insulate their souls from my curt tone and lack of happy with every drawer I open. They roll with me and defend their need to keep whatever odd item has somehow found deep meaning in their lives.

Midway through the day I pulled random trash out of the boys' toy box and sort of peeked to the bottom fearfully to see if any live things were crawling around in there.

I said, "Noah, these giant dinosaurs that you guys have had since Christmas 2007 that you never touch, can I give them away? They take up half the toy box space." Noah ran to consult with Isaac. Five minutes and much discussion later he came back to tell me I could get rid of one of the two. I was pleased enough with that answer and put the giant red dinosaur on a pile.

A few minutes later Noah came back and picked it up and began telling the piece of plastic all it had meant to him and gave a dramatic goodbye speech. I remained steadfast in my resolve and unmoved by the emotional production. I left the room to go do something else for a minute. Within a few minutes Noah came to me to say that he talked to Isaac again and didn't think he could do it. The red dinosaur needed to stay.  As it turned out, Troy wasn't feeling super supportive either. (packrats!) 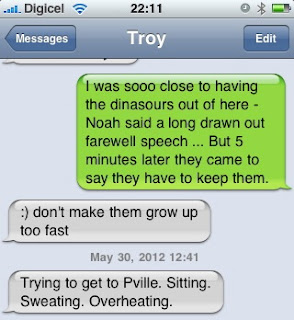 Later in the day I enlisted both boys to help organize in Hope, Phoebe, and Lydie's room.

It has been way too long since I made them do housework. This is one of the problems of having someone to help us with our house. It becomes quite difficult to raise kids that know how to work when someone (mom, dad, or Geronne) cleans up behind them quickly.

We get stuck in a rut of doing it ourselves instead of teaching and pulling the kids along. Geronne can't wrap her mind around the fact that I want the kids (yes, even the boys!) to know how to sweep, scrub, dust,  clean bathrooms, etc. etc. She does nothing to support my desires.

I asked Noah to go get me a cloth to dust. When he came back in he said, "So what'dya do? Just rag down these shelves?" Most people just call it dusting, but yes, that's what we do. He proceeded to dust in a way that moved dust all around but didn't so much remove any of it. I've failed this boy.

After an hour and a half in the boys room and longer in the girls' room everyone celebrated that another dreaded day of listening to Mom's unanswerable questions and ridiculous rants had ended.  By that time Jen had landed and we headed out to pick her up.  As I tucked Lydie into bed last night she said, "I am gonna miss Jen while I sleep!"  :-)  We're all happy to have the ever-so-organized Dokte here for the month! 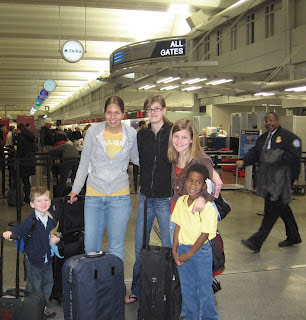 Photo: Just after Christmas 2007. The year that the boys got tons of dinosaurs that they flew to Haiti that they now cannot part with.  Photo with Jen and Tess as they escorted Paige, Isaac, and Noah home to Haiti.
at Thursday, May 31, 2012