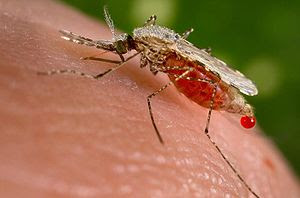 For the last couple of years I've been wanting to make a friend at the Centers for Disease Control to tell them that with my vast and infallible knowledge of Malaria, (self-appointed expert) I have determined that there is Chloroquine resistant Malaria in Haiti.  On more than one occasion we've treated with Chloroquine only to have to treat again within a few days/weeks.

We've found Malaria in Paige's blood when it doesn't make sense to be finding it.  Some actual statistics (as apposed to the ever-popular asstistics): Between the 9 members of this family 6 of us have had 19 cases of Malaria in 6.5 years ...  Troy being the grand-prize winner, with double the number of incidents of the runner-up.  For some reason our Haitian-born family members never get Malaria. (knocking on wood)

Now that I read this article (below) I am less sure of my infallibility.  Maybe there isn't Chloroquine resistance but instead just cruddy, ineffective Chloroquine.

Here is a kind no-pressure suggestion for all visitors to consider:  If you visit your doctor before you come here (a good idea if you can do it), please consider asking your Doctor if he'd prescribe prophylactic dose for you and a treatment dose of Malarone for you to leave behind in Haiti.  I cannot speak for others (I'd bet they'd like to have it on hand too) but our family would be more than happy to buy a treatment dose of Malarone (12 pills usually) from you as you're leaving Haiti and don't have a use for it.

Our friend recently brought five doses to Haiti and thanks to his generosity (Holla Tex!) we were able to treat a bunch of people that had Malaria in one month.  It is a great (fairly expensive) drug that we cannot get here, but we have frequent use for it.
NY TIMES article:
(full copy below)
Fake and substandard malaria drugs are a growing threat to efforts to beat back the disease, a new study sponsored by the federal government has concluded.
Scientists from the National Institutes of Health analyzed 27 sets of tests of antimalaria drugs purchased in Southeast Asia and Africa between 1999 and 2010. The researchers published the results on Monday in The Lancet Infectious Diseases.
About a third of the drug samples from both continents failed. Some were clearly criminal counterfeits, some were expired drugs that had been repackaged and some were poorly made with too little active ingredient.
Malaria researchers have been warning for years that parasites resistant to even the most modern artemisinin-based drugs are emerging on the Thailand-Cambodia border and that ineffective drugs are to blame. Resistance to older quinine-based drugs emerged in Southeast Asia, too, before spreading to Africa.
Malaria is endemic in 106 countries, but only three African countries have labs capable of testing for fakes, the study said.
An editorial accompanying the study suggested that much more testing be done in China and India, where most drugs intended for poor countries are made. It also endorsed greater use of scratch tags for authenticity checks, spectrometers for field testing and radiofrequency tags for shipment tracking.
The editorial also said that drug makers and the World Health Organization need to stop fighting over what constitutes a “counterfeit” drug so that bad drugs can be seized while legitimate generics are not.