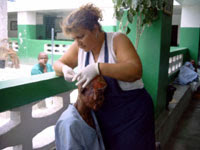 Medical Me?
A few years ago, my mother was hospitalized for her second knee replacement. Though it was June, University Hospital was heavily air-conditioned, so she asked me to find her another blanket.

Opening the cupboard in her semi-private room, I didn't find a blanket, I found many. Some showed their wear, but they were all pristinely clean, all readily available. I was glad for my mom, and for the hundreds of other patients the hospital serves who I'm sure had their own well-stocked cupboards. But, having just returned from Haiti, I was newly sad for those unlucky enough to be sick there, in the Western Hemisphere's most impoverished country- sick among the flies, among the garbage, among the throngs just trying to survive from day to day.

I love Haiti. I have since my very first visit in 1997 and the places that seem to draw me, year after year are the hospitals and clinics. To say one sees desperation, borders on understatement when on any given Saturday at St. Joseph's clinic, Cite Soleil's most destitute come. They line up 4 and 5 deep, many holding tiny, listless babies who look like they won't survive the wait. They line up with horrific burns that would have them in intensive care, in Canada, but in Haiti, they will be debreted and bandaged, maybe given an intervenous if there is enough serum that day and sent home with a handful of anti-biotic- hopefully one that hasn't reached expiration. They come with enormous, throbbing abscesses that are as common as acne is to us, they come with cancers that have manifested outside the body. Funny... before I saw this for myself, I thought it was a physical impossibility. They come because the medical care provided by The Missionaries of Charity- Mother's Teresa's Sisters- is free and the touch, compassionate.And, I have the privilege of working among them and trying to help ease the suffering, at least for those few hours.

The Brothers of Charity Hospital is another place where the hopeless find hope, or at least companionship as many await death on their hard, plastic mattresses. When I go to Haiti on my own, this is my "domain" as it were. The Brothers come to rely on me, the men all hope for a female's touch whether it be just nail clipping and shaving or the more involved tasks like dressing changes and suturing. I have held the hand of many as they gave up their spirits to God. It is a deeply profound experience.

Some mornings it is difficult to leave the relative cool and calm of the Guest House and walk the 1/2 hour in the dust, the unrelenting sun, among the pungent smells of exhaust and sewage into Pele. But the moment I enter the maze of shanties and vendors' stalls, I feel more than welcome, I feel at home. Even more than that, I know I am needed.

When I tell North Americans what I do there- IV's, closing gashes, lancing infections, the first question is always, "Are you a nurse?"

No, I am a secondary school teacher. My medical training, like many of the volunteers, was "trial by fire". I sewed up my first cut, a jagged wound on a little girl's head, after being shown the first 3 stitches by one of the Brothers. He did this, then handed me the hemostat and the needle saying, "Now you". He watched me do one, then smiled, clapped me on the back, and went back to dispensing meds. I didn't have time to feel frightened, or to protest; I just did it because there was no choice. Soon, and maybe a little sadly, it becomes routine. At least while you're there, actively working.

But, at night- and Haitian nights are long with the sun setting around 6pm each night- at night you remember. At night the young architect who'd had such a bright future, who had that day proudly shown you the passport he carries in a little plastic sac, comes back to you and it is very difficult to reconcile the handsome, somber looking youth in the official photograph with the mask of scarred tissue that barely looks human with its fused features and skull bone showing through raw and tender scalp that he is 10 months later. 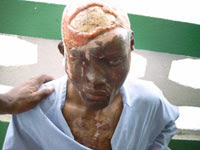 But, it is Daniel. He natters at me in Creole, then French, then English, and throws in a few words of Spanish. He wants me to appreciate how intelligent he is. He wants me, and anyone else that comes into the milky vision of the one eye he has left, to know there is a human being beneath the horror. At night, I see him more plainly than I did during the day and I try to think of ways to help him- email his picture to burn specialists, beg their help... no one even answers.

Back in Canada I talk to people, show them video, motivate them to care, to help in some way, any way- money, time, to go see for themselves, join an NGO. And, each time just one person asks an unsolicited question, or mentions Haiti on his/her own, my heart leaps. Yes! Ask, comment, argue with me, just give Daniel and the Richards and the Eliases and the endless many whose names I don't even know, but who suffer for one reason only- their geography- an opportunity to speak.

My mom will likely be in the hospital again someday ; she is prone to it. But she will have a comfortable mattress, clean sheets and her own pillow. She will also have a trained medical team, not just a volunteer teacher, concerned with her, treating and caring for her - and thank God for that. I just wish it were like that for those who are my second family, too.
at Saturday, June 20, 2009