Tonight I put Phoebe and Lydie to bed side by side in portable cribs, just as they have been sleeping the last two nights.  They missed naps and were both insane again so I figured they would be asleep in two minutes.  It was very quiet right away.
Troy took the kids to go next door to the house of Zach for dinner and I made one last check on the girls. When I peeked in Phoebe was out of her crib and hanging over the top of Lydie's crib.
Even in the dark I could see that Lydie's t-shirt had brown something on it. I turned on the light and saw the mess and asked Troy to come back and help me figure out what in the heck the ladies had done. We found the brown pro-gel pomade open on the dresser. I am pretty sure it is intended for a black man's hair.  Phoebe thought she was putting lotion on Lydie ... you know, just super duper concerned about Lydie having moist young looking skin. Instead of moisturizing she was brown-a-nizing her sister. (Phoebe has a lotion obsession and is always getting into trouble with too much too often on her legs, hair, clothes, whatever.)
It was dark so Phoebe could not have known she was making her sister brown. But, had she known I am sure that wouldn't have stopped her.These two have become the female version of Dennis the Menace  -  strong-willed and ornery and mischievous as all get out. Give them a couple years and they'll be stealing the car in the night to go to parties together. But not until AFTER they moisturize of course. 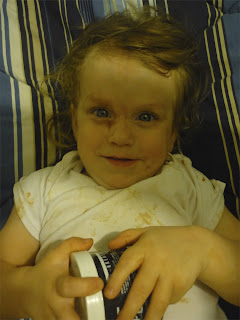 Paige got to help in the clinic today, she was all smiles and loved it. She gets to help tomorrow and Thursday too.  Tomorrow we're going to go visit Gran and Sophie and a couple other old friends from our old stomping grounds.  The babies wake up at 5am here - we're tired and calling it a Tuesday. G'Night! 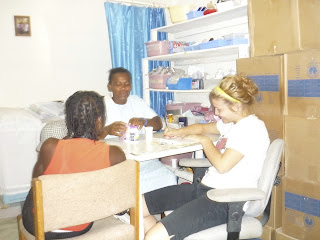