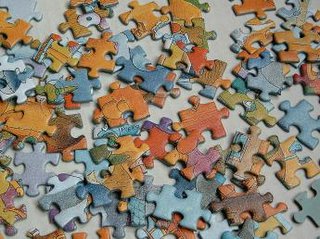 When Lifeline booked our tickets to go on February 7th, it was because the two big construction mission teams would be departing that day.

We knew it was election day.(The fifth one.) Troy and I talked about that a lot. We prayed and discussed that if that date was unsafe, or unwise, or just not God's date, that we believed the airlines would cancel flights so it would not be up to us. The decision would be made for us. We also assumed that if the door did not close on that date, than it was a certain bet that we would have no issues getting in and out of Port au Prince.

Tonight when Troy called around dinner time to announce that the flights were all cancelled on February 6th and 7th ... it almost felt like a little kiss from God. Not because I don't want to go ... I miss Troy, and I DO want to go. But that is exactly what I prayed for. The 7th is not God's date.

God sees the whole puzzle. I have like six or eight pieces of His giant 1,000 piece puzzle. I really like that He knows it all. It is so good to not have any pressure to solve these things on our own. In every situation in life you are free to turn it over to someone who is WAAAY better at all puzzles and WANTS to take care of it for you. Nice. I like it. ~Tara

"I believe in Christianity as I believe that the sun has risen: not only because I see it, but because by it I see everything else." ~C.S Lewis
at Tuesday, January 31, 2006