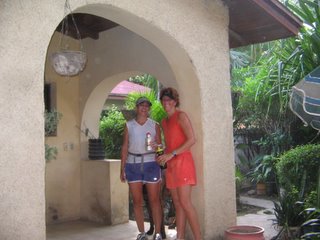 (Photo at taken at Beth's house, Tabarre, Haiti Spetember 2005 - after a morning run)

When we first started thinking that we should look into serving in Haiti, we spent a few weeks trying to discern if we were on the right path. One of the first things we prayed was that we would have some sort of confirmation, a tangible way that we could see that we were at least correct to be looking into the possibility.

At that time, in early July, I was getting ready to run Twin Cities Marathon. I was on a yahoo group for marathon training. I had been on the group since January.

Minnesota had a very hot summer as did a lot of the country. People were posting and complaining about how difficult it is to train in summer heat. A post came up that said "Try running in Haiti, I train for marathons in Haiti!" It was posted by Beth who has lived in Haiti for 16 years and has been a runner for 10. She had been on the yahoo group for a long time but had never posted before that day.

On the surface it might not sound like such a big deal. But the group has only 700 people on it. We had both been on it for many months and she chose to post for the first time within a day of us starting to pray that the Lord would show us if we were at least correct to be exploring the opportunity to serve in Haiti. Beth was our first tangible confirmation.

After Beth posted we started trading emails and she became a great encourager and friend to me, and then to Troy. How cool that I found a friend who likes running and lives in Haiti! We were able to stay with them in September for a night and Beth and I even got to run together.

Meeting Beth is one of many examples from the last five months of how God confirmed that we should keep moving forward.

So many people don't think God answers prayer in tangible way, they miss the answers that God gives because they chalk it up to coincidence. We say there are no coincidences!

"What you have to ask yourself is what kind of person are you? Are you the kind that sees signs, sees miracles? Or, look at the question this way: Is it possible that there are no coincidences?" ~Unknown
at Friday, January 13, 2006