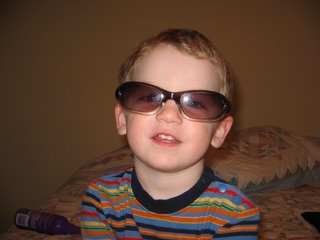 Today he spent the day at our Pastor's house while the big girls and I went on a field trip to the science museum. He had a good day and had not destroyed anything in many, many hours. Maybe he is on his best behavior when in the presence of a Pastor and a Pastor's wife?

At the end of the day we had some time to kill before Britt needed to meet her friends. Britt asked if I would take her to spend a gift card at the outlet mall, after we got the three little people back.

She ran into her store and the kids and I walked into Bath and Body Works. I looked away for 12 seconds and the next thing I knew Jack was handing me a bar of soap with a large chunk bitten out of it ... leaving behind not only missing soap & messed up packaging, but also the chocolate cookie that was in his mouth was slobbered all over the packaging that remained.

If you will pick up any random item and take a bite out of it do you belong in a Third World country? Huuummmmm. We're not sure, but maybe not. Troy, while you are out and about killing rats, maybe you could also sanitize/sterelize the entire village? Thanks honey, you're a doll.

The last two mornings, when he does his talking to himself in the crib thing (right after he wakes up) ... he has been saying: "err aaahhh ooouuu mama? Daddy wooek" (Where are you momma, daddy work.) He knows if Troy is gone, then he must be working.

Oh, lastly ... to explain why a child named Noah Matthew ended up going by "Jack-Jack" ... he has an amazing ability to move quicker, destroy more, and yell louder than any child we have ever parented. So, when the movie "The Incredibles" came out and the crazy Superhero baby was named Jack-Jack, it just stuck.
at Friday, January 27, 2006