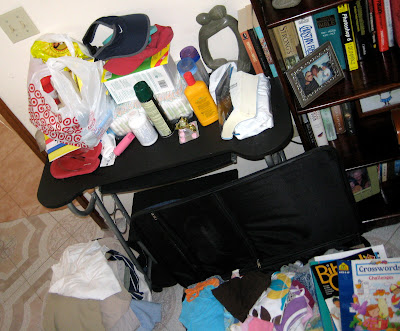 Today as I was hurrying around adding forgotten things it was nagging me that I was forgetting something big. I kept thinking, there is SOMETHING ... what is it?!!?!? I had to unpack everything in order to remember. As it turns out I had nothing packed for Hope. The boys, Lydia and Phoebe had clothes, diapers, books, sunscreen, etc, etc. Poor Hope had not one pair of skivvies or one outfit in the bags. I am glad I did not ignore the nagging or I would have had one ticked off seven year old girl on my hands - I could convince her of many things but she would never wear boy clothes/undies.

I wonder if the people in Cazale are aware the Ringling Brothers are bringing the Livesay Circus to town?

Rumors abound in this land, and for once I think a rumor is rooted in fact and it is not a good thing. Apparently there was some sort of a fire at the EDH main switiching station for a large area of the city. We have been with no city-provided electricity for three days and rumor is it will be weeks before it returns.

The problem is, if EDH says weeks ... that could mean months. Time is measured differently here. The average temp by 2pm in the shade on our porch has been 93 degrees with 65% humidity. This EDH fire is very bad for everyone. In order to have electricity the entire day it would cost about $25 in diesel per day. Obviously most of us cannot afford $750 of diesel for a month so we'll all figure out how to deal with zero electricity for much of the day and only run the generator to charge batteries enough to get through the nights.

Having lived in the countryside of Haiti I know that this is something that folks out there have to do without all the time, so really - I should quit my whining.... but I want to whine because it feels good. I also firmly believe that Port au Prince is usually about 5 to 10 degrees hotter than the outlying areas and those five+ degrees can make or break your attitude and coping skills. EDH is the payoff for living in this cement inferno - but when the payoff leaves ... then what?!?!? (Then I whine.)

To whom it may concern at Electricity D' Ayiti-
In the future I would like to request that EDH plans its fires in the months of December, January or February. June is not a good time to lose fans and refrigeration.
Hot sweaty regards,
T. Livesay
at Sunday, May 31, 2009