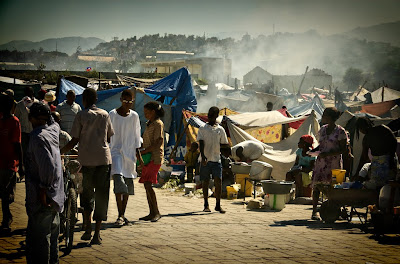 
I've been trying to write twice a day. It is as much for me as it is for you. I feel like I need to get some of the thoughts out for personal therapy reasons - but also because so much is happening in one day and our short-term memories seem fried - I know if I don't write a few things I won't remember a lot of this a few years from now.

Today was really busy. I think we all thought things would begin to slow down by now.

There were tons of first time patients. People that have been waiting and suffering for 15 days. Add those new people to the load of follow up dressing changes, it made for a crazy day. Most of the patients we've been seeing for a week already are starting to show great signs of healing. There are a few really tough cases that have had set-backs. One little guy had to have his ear cut open to have many maggots removed. There are a few kids with 3rd degree burns from boiling food or water falling on them when the earth shook. One boy has burns over half his face. A little girl has them all over one thigh and on her torso. Another boy named Chedner has a wide open cut that must heal that way because too many days passed to pull it together. We have not kept stats but we think the Docs and nurses have been seeing about 50 - 60% children. Today at one point we had three pregnant ladies in all at once -- and all three had broken bones.

Prior to the earthquake we worked weekly with the same 50 women. We know them well and developed relationships with them in our Prenatal and Early Childhood Development Classes. The majority of the ladies have not stopped in - just a handful have. We're hoping these ladies we've come to love are alive and hanging in there. Two of them stopped in today and it made us realize how much we miss our regular gig seeing them and spending quality time together. We wonder when we'll be able to go back to our Tuesday and Thursday class schedule. We wonder if they are okay.

We transported three women to the Miami Field Hospital. I got to quickly peek in on Jean. He looks like a new kid. It is amazing what a little hydration and rest and medicine will do for a boy. Tomorrow he will be discharged from U.Miami and will likely stay with us for a few days longer. We gave him some clothes and a toy and he was totally beaming - he is a sweet little boy.

We have a big group of Docs going home tomorrow. We had some trouble getting the next set of Doctors to Florida in time for tomorrow's flight. We're going to be very short staffed for a few days, prayers for those of us non-medical people to step it up and be helpful - are needed. A lot of us are also feeling a slump in our energy and patience levels and need to pep up and get over that right now!

~~~~~~~~~~~
I don't think we'll ever forget the way the earthquake felt, but I have not taken the time to write about our personal experience in detail ... On that Tuesday we had finished up women's program around 3:30 and a few of us ran to the store to grab a few groceries. I dropped friends off to their house and headed home. Troy and I were making dinner for two visiting adoptive moms. We were working together on enchiladas while Lydia sat on the kitchen counter and Hope played quietly in her room upstairs. Phoebe was just hanging out in the kitchen, Paige was helping put things away from bags we were unpacking. The boys were over with Vivien watching a movie at the guesthouse.

I told Troy I would be right back and ran up the stairs with a handful of stuff. Paige followed with more things to be put away. I walked by my computer and hit send and receive. The first thing that registered in my brain/body was the crashing sounds around the house. Before I could tell the ground was moving I heard things falling everywhere. It started with one crash then there was crashing coming from every direction. I remember thinking, "Who is bombing us?" At that time I did not know Hope was in her room. I told Paige to come and we ran down the steps while they moved from underneath our feet. We got to the kitchen to see Troy coming toward us and telling us to get out. (He forgot Lydie on the counter.) I pointed to Lydia bouncing around the counter while glass was crashing to the ground from the kitchen cabinets. I grabbed Lydie and then Phoebe and sat down in the entry way to cover our heads. We never left the house until it was over. I don't think I knew yet that it was an earthquake. As I sat down Hope came screaming down the steps. The house was moving enough that it tossed you side to side as you walked. She had been coming through her room and the upstairs at the time the bookshelves were falling forward. She was hysterical. I looked out the front door to see the water in the pool flying about four feet into the air and across the driveway. Jeronne stood gripping the kitchen table screaming at the top of her lungs for Jesus to save us. I kept asking Jeronne to let go of the table and come sit by us. She ignored me and kept screaming. We sat another ten seconds or so before that first earthquake ended. In total we think it lasted about 40 seconds. As soon as we pulled ourselves together I told Troy to go check the guesthouse and the people in it. In the time he was gone the first aftershock happened. Our littlest girls gripped us with all their might. I ran inside to grab a phone and called my Dad. It was still so early that I don't know if I even made sense when I called him. After about 3o minutes I quickly got on line and posted. Most of my family told me they had not heard it on the news at the time they saw the blog post.

We spent a lot of the next 48 hours pacing, praying, wondering, and running in and out of our house with each strong aftershock. There was an eerie quiet in our neighborhood. It was scary. We decided to send our kids out on Thursday night. The Embassy told us they would go to the D.R. and then be able to book commercial flights to the USA. We asked the two adoptive moms to look after them. As it turned out we put them into Embassy Suburbans at about midnight without knowing where the plane would take them. No one would tell us that. After I put them in the truck I went back out to the area we had been resting in the grass and cried like a baby for an hour. Later in the night I got in a fight with a spoiled girl freaking out on the Embassy employees about not being able to bring her big suitcase. I watched CNN live coverage of Haiti while lying on the Embassy floor. I could not believe any of it was real. I went back outside and made a bed in the grass. When I woke up Troy was yelling at me across the courtyard from the front gate. I got up to start moving toward him. He was telling me the kids had made it to New Jersey and were safe. I dropped to my knees and sat there sobbing and thanking God.

In the almost two weeks that have passed since we sent them out, I have been struck again and again with the reality of how easy we have it. I watch these moms and dads come into the clinic with hurt kids and I think about the total and complete relief I felt when I knew my kids were in a safe place ... These parents don't get the option to put their kids on a flight out of this messy and difficult situation. They don't get to choose the best Doctor or a safe and easy place. They don't get to wake up tomorrow and learn their children are fine, cared for, fed, and resting in the arms of loved ones abroad. I wish they did.