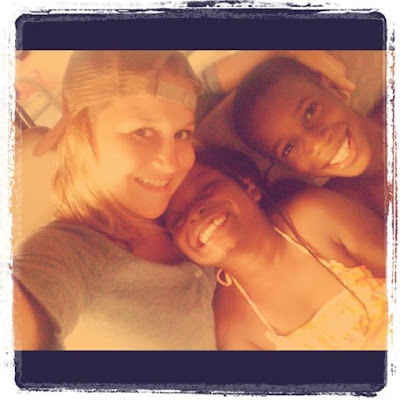 I try to make each post have a certain tone to it.  I'd like it to clearly be funny and light or serious and important. I'm not sure why, but it seems weird to mix up trivial and troubling things all in one place.

But this is truth. Life is both troubling and trivial.  There are things about a lot of it that are ambiguous and undefinable.

In one day ... Silly and stupid,  sacred and serious. We are pursuing the paperwork needed to make Moses a legitimate candidate for adoption.  The process in Haiti is .... how shall we say? ....  Sucktacular. That is putting it ever-so-gently.  I am not even guessing about how long it will be to have what we need to move forward on this option. While that part can be discouraging, we are totally encouraged with the progress we're seeing him make. We continue to fight our own emotions and find a way to balance loving him and knowing that we'll need to let him go one day. We now have someone coming over to care for him during the day, this has been very helpful.

Since the day he was given his new name (we sure wish we knew what his original name was) a month ago, he has learned it.  He turns his eyes/head whenever someone says his name now.  He loves music. He responds to familiar faces and voices.  He belly laughs. He has a happy time almost every night. He gives and receives love.  Despite his brain-injury, we believe much is possible for Moses.


~ ~ ~ ~ ~ ~ ~
Emmanuella update:
Emmanuella has been in the prenatal program at Heartline for many weeks.  She stood out because she looks so young. She is 15 years old but emotionally seems 9 or 10 years old. She has been victimized and her pregnancy was a result of rape. She reported the attack to the police but as is often the case, nothing was done to bring the perpetrator to justice. Her mother died when she was 12 years old of some sort of heart problem.  Her father clearly cares and does his best, but as a single dad trying to provide in a place where work is hard to find and the wage isn't usually sufficient, things are very challenging for them.

On Monday Emmanuella went into labor.  There was a lot of debate about whether or not the Heartline midwives could deliver her baby.  We were all aware of the challenges and praying about them.  They included but were not limited to: Her size - she is very tiny. She has very VERY high blood pressure.   She has been hurt. She withdraws emotionally quite frequently. 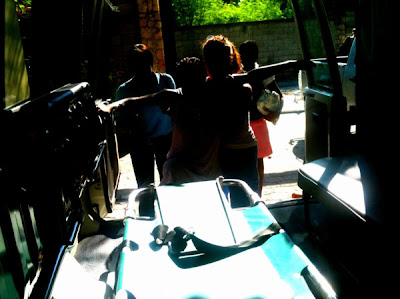 All day Monday and all through the night Beth and Jonna and Dr. Jen helped her along as she labored. They did everything in their power to give her a safe space and calm, loving environment to deliver.  She listened and cooperated well.  Dr. Jen oversaw the medical aspect of the labor. We asked on facebook for prayers for her.  Dozens responded to that request.

If anyone needs to be held, loved, and supported through a delivery - it is Emmanuella.  Everyone gave it everything they had but in the end the baby would not fit through tiny little Emmanuella's pelvis and she had to be transported Tuesday morning for a c-section.

Beth spoke with her family last night and they said that a baby boy was born and they thought that his head was possibly deformed.  We're not certain of that yet as it could be a result of the hours of labor.

The discouragement was palpable before class-time yesterday as Emmanuella's situation weighed heavily on our minds.  It was a big disappointment to see her get through so many hours of labor only to stall out and need surgery.  Of course a c-section is not the end of the world but what it means to Emmanuella is quite different than what it means to those of us with consistent access to medical care.

We are experiencing that place in "helping" her where we need to discern and hear clearly from God.  The Harbor House is technically full. We're not certain if making room at the Harbor House is best. If her sister can be a support person we don't ever want to play God and we want to allow her family to help and provide for her and her son. Those decisions are always difficult to make and none of them are made lightly. We're not clear on what needs to happen so we're praying for guidance.

~ ~ ~ ~ ~ ~ ~ ~
Harbor House:
As you might expect in a house filled with many young women, sometimes things flare up. Yesterday a major unresolved hurt of one of the staff at the house caused a big fight and suddenly the leaders at the house weren't acting in the leadership role expected of them.  The teen moms all observed as things got pretty ugly between two of the staff.  We recognize that one of the staff is suffering from PTSD and that we need to find help for her to deal with the pain of what she endured during the earthquake and weeks that followed.  Please pray for peace and resolution to this situation.

~ ~ ~ ~ ~ ~ ~ ~ ~
Kid Stuff:
Lydia crawled into bed this morning with us.  She grabbed my face with both hands and kissed it and said "Oh you such a cute chunky little Mama."  I told her "chunky" wasn't my favorite adjective. She responded by loudly singing, "chunky, chunky chunky Maaaaaamaaaaa".


Isaac saw Troy and I kissing this morning and said, "You guys don't do it exactly like in the movies. You gotta go like this." He closed his eyes, opened his mouth, and mashed his face around in the air violently.

Noah had a crud attitude about some of his homework yesterday.  Troy grabbed his guitar and wrote a song about Noah's crappy attitude being related to his double-jointedness and -  voila!  - the attitude was gone and we were back in business.

Paige is truly excited about the work she is doing this year and the opportunities that Jimmy and Becky and the curriculum will afford her. She continues to put the most time in with Moses in the evenings. By her choice, she's always the one to get him to sleep. We have been promising Paige a night out for a long time. We were going to do it and had a sitter set up so we could go.  Then Malaria hit.  She feels great again and we're really hoping to treat our favorite 16 year old to a night out on the town in PAP sometime soon.

Phoebe has taken to screaming at the top of her lungs when the smallest infraction occurs with any of her siblings.  She is getting similar results to those of the "the boy who cried wolf".  Phoebe's scream has come to mean nothing.  Let's hope this doesn't back-fire on her.

Hope is ever solid and without drama. It probably seems like I have less to say about Hope. It is only because she is mostly chill in her approach to life.  Hope is tasked with tolerating A LOT of boys at school. It is Hope vs. Anson, Hayden, Isaac, Ashton, and Noah.  Five to one and she handles it like a true professional.  All of us would be better off if we handled our life challenges with Hope's unperturbed attitude.

The little MK school for fools is totally amazing.


All four school aged kids are happier about getting up in the morning and leaving for school than I have ever ever ever seen them. The kids love school and came home demonstrating how much they learned.

Yes, yes, maybe day two of school is a little soon to declare it a total earth-rocking success. I'll give you that.  (It's sort of like when Baylor wins their first football game and then they proceed to act as if they've just become permanent champions of the entire universe.)