All kinds of scrambled up thoughts

When the title looks like that, up above, you probably already know it is Tara writing, not Troy. He put up his nicely orgnized thoughts prior to this post. Scroll down and read his post first. He is a smart guy. He is better at getting to the facts.

I always write late at night or early in the morning, when everyone is in bed. My brain won't shut off tonight. This was easily the strangest day of my life.

We found out at 7am that the funeral for Midraine would be around 3 or 4pm. This is a Haiti thing. Church is at 5 or 5:30. The other night it was at 5 but it started at 6:10. Nothing is at a really a set, firm time. That's just not the way they like to roll. It is an odd thing for uptight Americans to get used to. I can think of at least six of you that read this blog, that would go nuts with this lax approach to scheduling. You should come down, we want to mock you and watch you slowly go insane.

Honestly, we don't know what the scheduled start time was for the funeral. We showed up at 4pm and the singing had started. People filed in all the way to the end of the service at around 5pm ... no one seemed offended by this. We were way earlier than 80% of those who attended.

I am going to back-up to the beginning of Tuesday now. I told you it was scrambled!

Once we knew the time frame for the funeral we decided to take mom and dad up to the beach. When you have your parents in town, willing to buy your lunch and admission to the beach; it is just idiotic to pass up that chance. We might be slow learners, but we are not idiots. 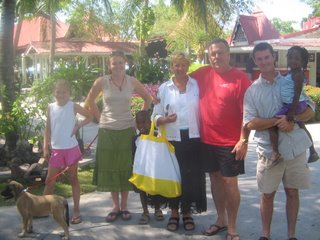 We had a nice time at the beach. The breeze was perfect and Dad remembered being there in 2002 ... only he had forgotten how nice it is there. While we were sitting at the table chatting and watching the kids play in the water a guy walked up and introduced himself. We spent the next two hours chatting with Dr. Bonnet, a really neat Christian guy who has a vision for a 400 bed AIDS hospital, right next door at the old abandoned Club Med property. He shared a ton of really interesting information and cool stories. We know that God is in the details because we found many ways we could help each other if we share our knowledge and skills. We exchanged e-mail addresses and informaion. Lifeline is building a medical clinic, so to meet a visionary Doctor who loves the people of Haiti was a really neat thing. We had many of those, "Oooohhhhh, this is GOD" moments during our chat with him. Bon Dieu Bon!

We raced home to change and go to the funeral. We had no idea what to expect or what was expected of us. Mom, Dad, Paige, Troy, and I went. The service itself seemed very similar to the way we would do it in the U.S. They sang, they read the dates and told about her birth, her life and her death. They sang again and then there was Rony's sermon. Even with the language barrier I knew Rony was telling everyone they better get right with God because you never know what tomorrow will bring. Watching Pastor Rony preach gives you a warm fuzzy feeling because his delivery is passionate and loving all at the same time.

I would have loved to have taken pictures inside of the church but it seemed like a bad and disrespectful idea. Besides, we were already quite a distraction without adding a camera to the mix. It is not considered rude to stare here ... so, yeah ... they pretty much stared at us today. The area where the funeral took place is not near any mission that we know of so those people were probably shocked to see us pull up in their neighborhood and I am sure they wondered why we were there. Lots of people that were NOT attending the funeral stood at the doors just to stare at us.

When Rony came over during the last song and asked Troy to come up to the front I got a little bit nervous. Like Troy, I thought they were asking him to help carry the casket and it was just a brief moment of wondering what the heck Pastor Rony was doing?!?!? Troy prayed in English but he did not tell you that he also prayed in Creole. Right when Troy was done praying they came and took Midraine's body and everyone filed out and followed for about a half a mile down to the cemetary enterance. Pastor Rony must think Americans cannot walk, because he tried to tell Troy to take the "machine" to the gravesite. Troy told Rony we were all able to walk, just like them.

Paige held Giselle's hand most of the walk there and back. Paige loves Giselle, she is one of Lifeline's teachers and Paige has been working with her, teaching English. 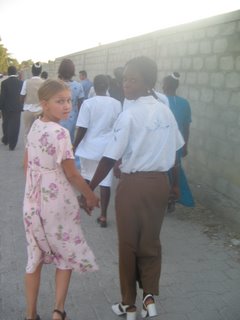 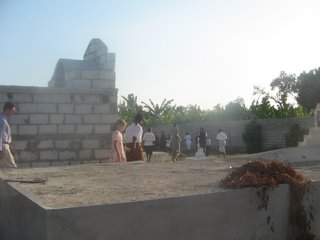 At the gravesite there are all the little houses that are used to bury many people. The ground is totally uneven and unkept. You have to watch every step you take so you don't end up face down. You can imagine that carrying the casket through the graveyard to get to the correct plot was no small thing.

We weaved our way back and were only able to take the pictures becaus we hung back a bit. They sang a few hymns and then set the casket down into the hole and proceeded to cover it with cement. Most people started leaving at that point.

We walked back to the truck and loaded everyone in. We thought we were going home. Rony said "Troy, now we go visit Mama Midraine." Troy said "okay, where?"

About two blocks down we stopped the truck and unloaded everyone. (We brought six people with us from La Digue.) We filed into the "yard" area of the "house" and everyone dipped their hands in a bowl of water with green leaves floating around in it. They smelled like mint leaves. They had a towel to dry them when you were done. Then we sat in rows and waited to see what would happen. It was really odd to not know what to do or what was happening next. After everyone had a chair they brought out two cases of TEEM and PEPSI and a big bowl of ice and handed out cups, ice and pop. Paige and I wanted to share one but they would not hear of it ... so we both had our own big bottle of pop.

We all kept looking at each other like "can you believe this?" Dad, in his smart alleck way leaned over to Troy and said "Am I the only one here with monogramed cuffs?" Ha, you see now where the sarcasm originated. This is learned behavior! There was a lot of akward silence and by the end most people had turned to face our direction so they could count the pores in our noses, or so it seemed. That was the most staring we have encountered since arriving here. We stayed about 20 minutes, drank our pop, hugged the mom and brothers and then we headed home.

Dad and Mom wanted to offer the cab part of the truck to Haitians, so they climbed in the back of the truck. We found it hilarious when an extra five people said they wanted a ride and mom and dad were smashed like sardines with no less then 8 other people in the back with them. Hee hee. They got some serious opportunities to experience the culture!

When we got home we had an early birthday party for Britt. It was fun, but kind of lame because I could not locate the pepperoni I bought for her pizza we made and I could not find a candle for her cake. She was happy with an early gift and the ice cream we picked up in Port on Sunday. All things being relative, it was a REALLY GOOD party. Plus, it was not the "real" party, that happens later in the month. This was just a warm up. 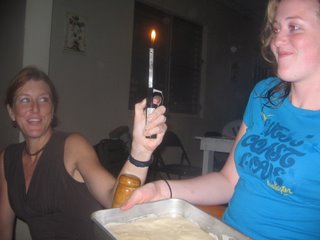 Now I am trying not to get sad that the trip is over and I won't see my parents for months. You would think at age 33 I could take that in stride, but it makes me sad. I miss my sister so much too. Waaaaah.

Mom says I need to cut back on posting photos of my kids and show you more of Haiti. I am going to do that. Sorry, I just kinda like my sweet kids, so I forget that you KNOW what they look like, but you DON'T KNOW what Haiti looks like. I will work harder at a better balance of photos. Haiti is devestating, in a lot of ways. The photos don't do it justice, but I will post them as time allows.

The only other comment (which should have been organized in a paragraph above) I have is about the way people grieve. I am a crier. I cry at everything sad. I cried tonight when I read a letter from my grandma Porter talking about missing my Grandpa who died nine years ago!!! I cry over any little thing. Today, at the funeral there were two people who wailed with grief. Not crying, wailing (even screaming) ... it made your heart hurt to hear it. It was a sound I don't think I will forget. It was a day I will never forget. Thanks for sticking with this to the end. Forgive the random order of it all.