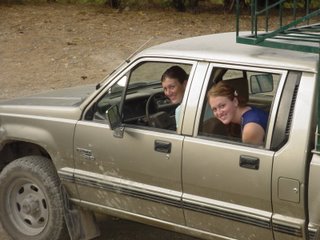 We left at 7:30am to take Edmon to get his toe checked out. I was the driver. It was a blast. I can drive in this country, no pwoblem. (Haitian pronunciation & Creole spelling) I used my horn, I flashed my lights, I did just fine. The only mistake I made, was not seeing a speedbump, but we weathered the bump and lived to tell about it. 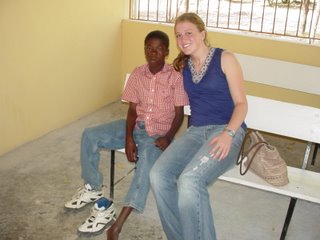 Edmon is doing great! It was so good to go learn a little bit, but even better to hear that Britt had been treating him correctly for the last two weeks. We took him to a mission called Global Mission, they have a clinic where they mainly treat burns. The American lady that runs it is an RN from Colorado. We did determine that it was NOT a burn. He stepped on a pecan plant, at least that is what they call it. It has some sort of poison in it and it causes infection. The first time we saw him, two weeks ago it was inflamed so much it did not look like a toe. The toe had abscessed, but Britt had been doing the right thing. We learned a lot about signs of serious infection and what we could safely do and when we should seek help. It was a good trip. We learned a lot and got tips on some good resources to use in the future. 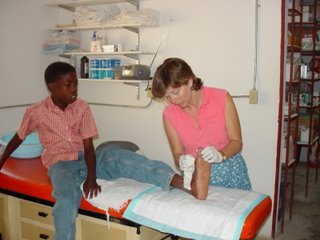 The driving on the way home was every bit as excellent as on the way there.

While we were gone, Troy and Hope and Isaac watched a video on the laptop to stay out of the tile guys' way. 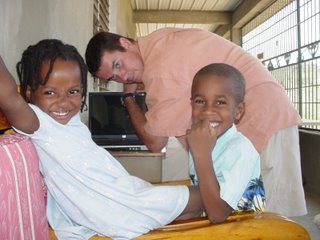 Britt and I DID IT! We made it the whole way to Petit Bwa. It took about 1 hour and 25 minutes to get up and 45 minutes to get down. On the way up we stopped to rest 3 times for about two minutes each time. At some points the climb is very difficult ... we were huffing and puffing like a couple of heavy smokers. Meanwhile, small children with beds on their heads passed us by. 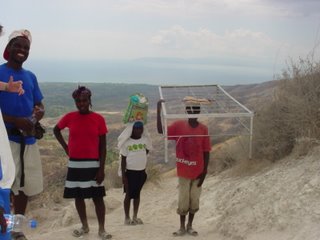 Some other sights along the way. The Hoppa's serve here at Lifeline, so we thought this was an important photo to take. :-) Someone found their box. The third one is Britt with Ti-pap and JeanRenell ... they came with to protect us, and mock us. 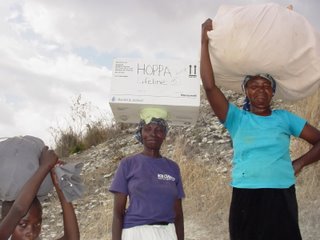 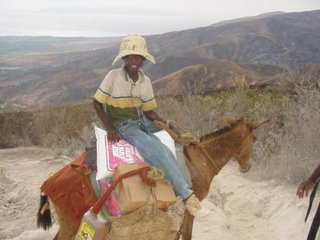 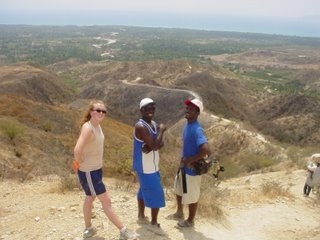 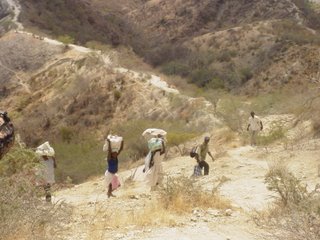 Britt and I, at the top. We were soaked in sweat, looking pretty nasty. Sweaty, but proud. That climb is tre difisil. 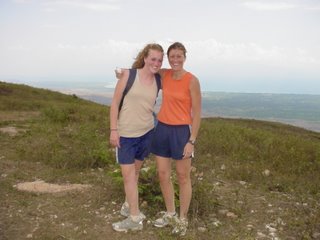 The kids from Petit Bwa that followed us around once we made it to the village, and some followed us the whole way back down the mountain to LaDigue. 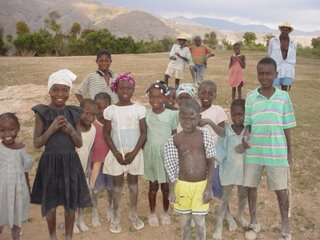 One other thing that is interesting and unusual ... and not something we do in our American culture. Haitians like to state the obvious. "Captain Obvious" as Britt would say. On the way up, as you pass people going down they say "You're going up?" We respond "Oui." On the way down they say "You're going down?" One lady said "You're dirty?" and pointed to my nasty dust covered legs and shoes. It is an odd thing, in our opinion. Apparently they just want to make conversation. There was lots of laughing along the way today, mostly at us. We're down with that, it is "no pwoblem" for us. Go ahead and laugh.

Britt and I agree, that while there is much to dislike about Haiti ... there is way more to like and learn from. We are so happy to be here to see all the things God has in store for us.