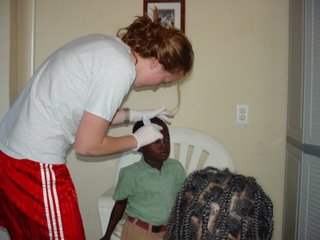 Today, I was very busy! I'd like to recall my insane day; maybe you will find it as crazy as I did.

6am - get up, let Peanut out, shower, get dressed

By 7am - I had my first patient. This is a boy, about 7, who goes to school here and has a deep cut on his forhead.

As I was finishing with him, another boy - the brother of Jean (the boy Paige has talked about, is in a wheelchair and HIV positive) comes for about the third time this week for treatment of the burn he told me he got from hot wood. Not sure if it was in a fire or what. (One of the many reasons I need to learn more Creole, and fast)

Literally, as I'm saying "naway deme" (see you tomorrow), a older woman who is a cook here came walking towards me pointing to her eye. I'm thinking, oh great, she's got something in there and I have to get it out. (Blood does not nauseate me, althought other 'elements' definitely do ---one of many reasons why I do not see this as a careeer choice but as a good thing to do right now.) She ended up just having a weepy eye (by now Rodson, the teacher who speaks English, has come over to help by translating for me) and so after talking with her a little bit on how it can be aided in getting better, she leaves to go back to work in the kitchen.

(If you're keeping track, that's three. So far, the most people I'd ever seen in one day was two people) Next, (still haven't left where I was standing when the first boy came) a women came asking for help for her asthma. But in the end, I guess it is her mother who asthma (man communication is intersting!) As she was leaving, a boy about my age, came walking up the driveway with a bound foot. I was expecting the worst, with the way it was all bound up, but he said he stepped on a piece of wood (I never knew wood to be such an 'evil-dooer' quoting W.) and had a deep splinter. After almost making him cry (and that's saying a lot since they are so tough here), I decided I had tormented him enough. The only problem was the fact that he wasn't wearing shoes and said he didn't have any. I knew of a pair we had that a guy on this last mission team had brought down for this exact purpose. They were a little small, but of course once I offered them, it's not as if he was going to not take them. Off he went.

Finally, after about an hour, I went upstairs. Not even 20 minutes later, tap-tap-tap on the gate and Jean Leon, the school director is here. He informs me that a student has vomitted (and this is the 'element' specifically that I cannot handle, not one bit) . Through much struggle, (I am helping him with his English -- I guess we have a lot of work to do;) I finally understand that what he wants is soap to wash the soiled clothes and something for the boy to wear while his uniform is being washed. We get him this and I finish up my chores.

Probably 15 minutes pass, tap-tap-tap, Jean Leon is back with a older student who has a fever. (that's number 7).

An hour later, Paige gets a piece of a cactus in her finger (she wanted to be counted as number 8).

So as you can see, I got a lot of school done today!! not. It is okay, because I am a little-ahead of schedule now (miraculously -- just a few days ago I thought I would be doing school all through the summer!)

God is good. I am learning a lot. I have made a few friends. (Paige, as usual, is little miss popular with her possy of at least five girls following her at all times -- saying "penge, Penge" -- not really sure where they got the 'n' from but then again, this one boy calls me "brix")

I am getting more and more determined to conquer this silly language. Mainly because a certain Haitan has been giving me a lot of trouble (teasing) about need more Creole and so I'd like to prove that I can do it. Not become fluent right away, but just get better than the level I am at now.

Tomorrow, I plan to do school and maybe try to hike to Petit Bwa with my mom again. We are going to try to plan the timing better so that we don't have a parade of people following us on their way back from the market.

Otherwise, I can always count on our Haitan friends to practice my Creole on and play soccer/volleball/catch/basketball (you can use a volleyball for all four!) with. My prayer requests are that I would continue to not only learn Creole vocab, but more importantly remember it to use it the next day. :D and for protection for my grandparents as they travel here. I can't wait!! 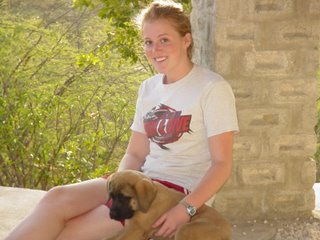 P.S. - I love irony. Part of the reason why I named our soon-to-be 200+ pound dog, Peanut. (By the way, she's gained four MORE pounds in one week! I've just been telling everyone - she is my cross-training program for swimming; carrying her around I mean.) On Sunday, on the way back home from the beach, I saw a bumper sticker on a truck that said something like "clean gas for a cleaner air Haiti". This is the same truck with pitch-black exhaust coming out of the muffler. haha!
at Saturday, March 11, 2006