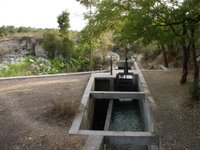 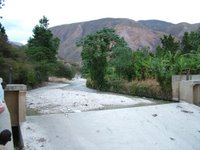 Yesterday morning we started out with a tour of the village with Grandma and Grandpa, and went to see the dam. There were a few villagers who followed us, and many more who just stopped and stared. The idea of going for a walk for walking's sake is unheard of here. I suppose that's true in any third-world country. When you're not sure if you'll even have a next meal, I assume you try to conserve as much energy as possible. It was hard to say goodbye to Randy and Carolyn after such a short trip, but we enjoyed having them here very much. I didn't accomplish everything I wanted to while I had a handyman like Randy at my disposal, but I'm getting used to that part of life here.

Tara and Pastor Rony joined me as we dropped them off at the airport this morning. Paige left with them to visit home for a few days. The locals have already started asking after her. She's made quite an impression here in a short time. One girl announced, with hands on hips, that Paige did not tell her she would be gone. Apparently it was her day to watch Paige. I don't think their English professor had the courage to tell them she'd be gone for a little while. We are missing her too, and it was a little hard to let her go. She's a little jet-setting adventurer, though, so we know she'll have a good trip. She sent us an email that said: "I got here good."

The other family serving with us here at Lifeline (Jason and Rhonda Hoppa) moved into the new building yesterday. It's not totally done, but the half of the upstairs they will live in is getting close. Please pray for an easy transition for them and their children. Also, I need some prayer and possibly a miracle to figure out how to fix the plumbing problems in their house. Today, I might just start cutting pipes and looking in them to see what's going on. I'll let you all know how it turns out.