Sorry to get political here. Ok, maybe not political, just annoyed. The next time some Greenpeace volunteer (read:activist) shows up on your doorstep asking for money to save the environment, give them my phone number. or email, or direct them here. Ask them why they are wasting time interrupting your dinner when they could be going somewhere in the world and trying to help where the earth actually is being destroyed. This country should have a tropical climate, but instead it is a desert. The forests are gone, and without the trees the topsoil has all been washed into the ocean. The garbage and waste produced by four million people in Port-Au-Prince is hauled just outside the city (right next to the Caribbean), dumped, and set on fire.

I'm no tree-hugger, but the things I've seen here blow me away. In researching the history of this country before coming here, I had read about the destruction of the forests. The trees were almost all cut down in order to turn them into charcoal. (This is not the charcoal on your Weber grill, mind you.) Trees are cut, started on fire, and then buried under dirt, allowed to smolder and decompose, and then compressed into "charcoal". This is used for cooking and for light, and is preferrable to using wood because it burns more slowly. I knew this had happened and de-forested the country, but I had no idea that it was still happening today. I assumed that since everyone apparently knew that this caused the massive deforestation and erosion of the topsoil, someone would have put an end to it by now. 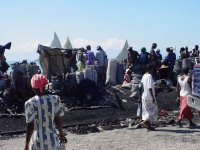 This picture is of a beach at the market near us. Charcoal is bagged and loaded onto ships here. The black charcoal dust that remains is piled so high the ocean can't be seen from the road anymore.


I drive along the Caribbean being assaulted by the smell of burning garbage and sulfur used in strip-mining. The view of the ocean is marred by trash and charcoal dust. In the evenings, the fires begin up in the mountains - burning off the thorns and chaff, hoping to grow something in the rock during the upcoming rainy season.

The water sources in the city here are all polluted and intermixed with open sewers and garbage. Animals, both alive and otherwise, fill the alleys and waterways as well. Many of the animals survive by eating the waste that is all over the city, and some are then eaten by the people here. 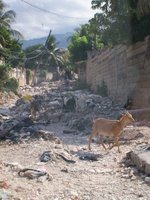 These problems exist on a tremendous scale here, and it is overwhelming to try and think of a solution. But the next time you find someone looking to save the environment and the world, send them my way. I've got a few projects lined up for them.