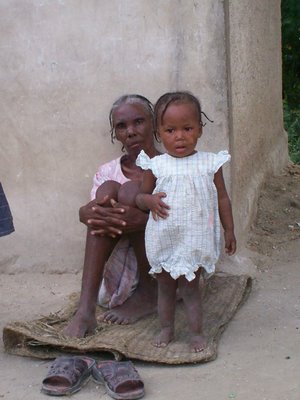 My only comment after reading this is UN article; statistics do not do justice to the reality of death and abuse and poverty. It is just math. A baby dying due to starvation has nothing to do with math. 300,000 children living as slaves is a number. Behind the numbers are real people, with real stories. This is not about statistics, it is about people...children, and babies.

More children are likely to die during early childhood in Haiti than in any other country in the Western Hemisphere, with one in eight likely to succumb before the age of five, according to a United Nations Childrenâ€™s Fund (UNICEF) report released today.

Thousands of Haitiâ€™s children lead lives of daily struggle and youngsters in rural areas lack even the most basic services, often walking for hours just to reach the nearest health centre or water source, and in cities violence and abuse lock children in a cycle that is almost impossible to break, according to the report, the second in a UNICEF series of papers on the core challenges facing children in a particular crisis location.

â€œWe applaud the public commitment of President-elect RenÃ© Preval to improving the lives of Haitiâ€™s children,â€� Mr. GonzÃ¡lez-Regueral said. â€œPolitical leadership can bring the types of changes needed so that a good, basic education and decent health care is not a matter of good fortune for a child, but is instead a common standard.â€�

The threats to Haitiâ€™s children detailed in the report include:

-Insufficient healthcare, with immunization rates for highly contagious and often fatal measles even lower than in Sub-Saharan Africa at just over half of all children vaccinated.
-Environmental degradation, with only 3 per cent of the entire country left with forest cover, leading to high death tolls during the hurricane season (3,000 deaths in 2004 alone).
-Lack of education, with many families unable to afford tuition, only 55 per cent of primary-school age children attending school, and one-third of those aged 15-24 illiterate.
-Violence and abuse, with thousands of street children forced to fight in gangs or become part of a subculture of bonded servitude, where 300,000 youngsters, three-quarters of them girls, work as unpaid domestic servants.

UNICEFâ€™s activities in Haiti include supporting routine immunization, improved nutrition and back-to-school campaigns that would encourage widespread enrollment, and supporting children who have lost one or both parents as well as those made vulnerable by HIV/AIDS in a country that has the regionâ€™s highest population of orphans.