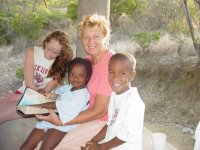 More Details:
-Mom and I painted the rest of our family room.
-Dad and Troy worked on plumbing all day and experienced much 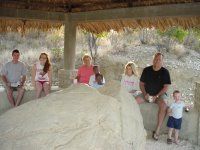 frustration.
-Isaac followed Troy most of the day.
-Hope followed Grandma most of the day.
-Jack-Jack found ways to get his hands into paint trays, most of the day.
-Britt and Paige worked together and "treated" two sick babies and prayed for each of them before sending them & the mothers on their way.
-Britt treated two foot wounds.
-Paige helped hand out the plates in the canteen for a bit during lunch.
-Some school work got done, not a lot, but some.
-Jack chased chickens around and made people laugh at his goofy behavior. 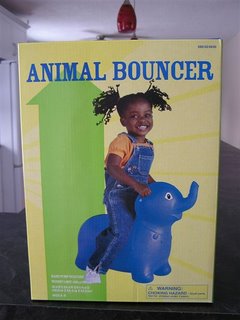 My friend took a photo of Hope's packaging debut so we could see it ... we sure wish Target Stores could find a market here, but since it seems highly unlikely she thought we would like to see what is on the shelves now at Target.

We showed Hope and Isaac a bit ago. Isaac was bummed it was not him, up until now he had the Target "fame" --- we told him it was Hope's turn now.

The other day the agency they worked with called here to try and book a job for them. Our 763 area code confuses people, making them think they are calling us in MN. I never got to tell them we were in Haiti because the connection was so bad they just kept hanging up on me. Oh well. I bet the job didn't pay enough to cover a ticket home. ;-)

We *think* we are going to the funeral tomorrow. Still waiting to hear the details of all of that.

We hear that we missed a whomper storm in Minnesota. Difficult to fathom deep, wet snow while we sat in our shorts; watching the sunset over the island.
With Love and Prayers,
Tara
at Monday, March 13, 2006