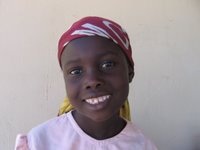 (Photo to right of the little girl who stepped on charcoal. She is such a sweet and kind girl. Her burn is healing well.)

Today was pretty exciting for a Saturday.

Troy left early and took the team to the airport and went to his rehearsal. Jason had a great opportunity to lead/teach the Pastor's training.

Some of you have asked more about Lifeline's Pastor Training program. It takes place every four weeks or so and area pastors are invited. It is a discipleship type of training ... just a way for them to get re-grounded in the word with some fresh Biblical teaching and visit/fellowship with other area pastors. Some come on foot from many hours away to attend. If you are a Pastor considering visiting us, let us know ... we could set up a training for you to be our guest teacher.


Britt has been trying for days to get Plantains to cook for us again. We have had some major uninformed foreigner-type issues getting them purchased.

First, we thought we had purchase a whole boatload of them at the market the other day. BUT, when we got home Mme. Maxo informed us that we had not purchased plantains, we had purchased some other fruit that looks almost the same but is niether a plantain OR banana ... she said "for babies" (it starts with an 'm' but we don't remember what it is called)---- she prepares this fruit for her baby with chicken sauce. Strike one.

(Photo below taken after the market on Wednesday, with the wrong item that we don't know how to cook --- not one of Paige's most photogenic moments.) 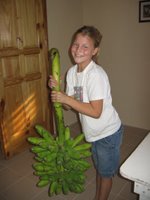 Then, today we asked Mme Rony to get us plantains, which are called "bannann" in Creole. (soft 'a' sound). Britt asked for six Bannann's and Mme Rony seemed to be tracking with us and said she would get them at the market for us. She returned three hours later with six Pineapples, which are called "anana" in Creole. Strike Two. Thankfully, pineapple's here are tiny so we already ate three of them at dinner time. (Here is Britt giving you a little reference point on just how tiny they are.) 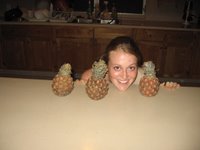 We are going to give it our best shot again tomorrow after church. We have a backup plan if we strike out, Rhonda has some she is willing to trade for a Pineapple or two. Making one purchase of one fruit should not be this difficult! It's almost like we are in a different country or something. (That was for you dad.)

The ladies and I started early with cleaning and laundry and it kept us busy a good portion of the day. Britt had four patients total, two were new ones. The two new patients both had pretty deep cuts, the little guy probably could have used a few stiches but we got the bleeding stopped and are untrained to do sutures so we will see how it looks tomorrow. It was too close to sunset to take him anywhere. The man cut his foot with a machete.

Britt hopes to do a one week mission trip to the North side of the country this summer to spend some time learning from a NP up there. She is pretty excited about the possibility. Hopefully it will work out for her to go.
Saturday's two new cuts- 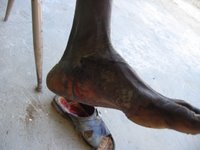 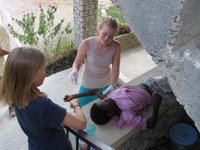 Paige has been getting her hair braided for three hours now ... this photo was taken before dinner. Giselle and Paige took a break to eat dinner and now they are back at it. 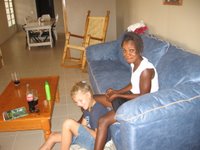 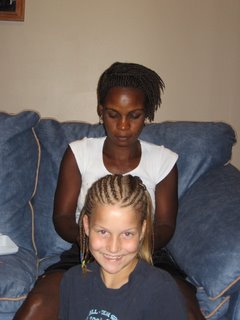 Troy came home without a TV today. We are all too pooped to watch a movie tonight anyway. After church in Port we are going on a hunt for one and then going to some friends for dessert. It should be fun!

I need to put some tired babies to bed now. Have a relaxing Sunday.

All our love, Tara