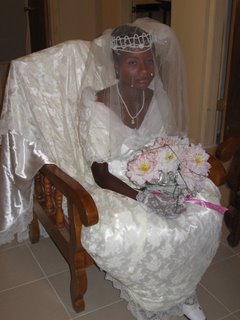 I did not get an up close seat, actually I ended up watching a lot of it from my patio and keeping an eye on a bunch of missionary kids (some of whom belong to me) ---- but here are the interesting high points of our first experience with a Haitian wedding & reception... 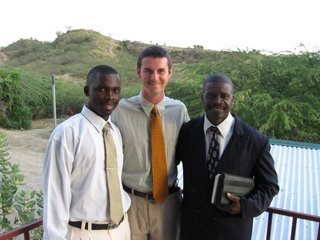 First, Jason was the father of the bride. That entertains us a great deal. He is only five years her senior, but he was the stand-in dad. Mme Maxo was the stand-in mom. In some photos it looks like Jason is actually the groom. You'll see what I mean. (He's the white guy.) 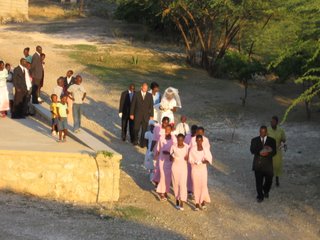 Second, the bridal party got ready in our house. One man, who was married to the hairdresser, just sat on our couch and stared at us. It worked okay for awhile, but after ten minutes of uncomfortable silent staring, we decided to busy ourselves with something.

Third, the bride never smiles. That is different. 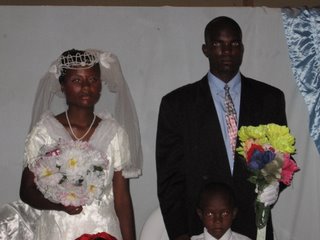 Fourth, Troy and I enjoyed this more than anyone else, probably due to our backgrounds DJ-ing weddings for far too long. As the wedding party walked towards the wedding ceremony, (the makeshift aisle was the driveway from our house to the Hoppa's house) there was a guy with a boombox. His job was to keep the music going for the bridesmaids. The bridesmaids did some sort of choreographed dance-ish shuffle thing all the way down the drive. The music being played on the boombox, "Sacrifice" by Elton John. Odd choice? Well ... let's see ... it is in English, it is a bad song, and doesn't it say "two hearts living in two seperate worlds" and something about a"cold cold heart"? How is that applicable to a wedding procession? What am I missing? The tape ended mid driveway ... not a problem, the boombox man rewound it and they all waited until he was ready and began shuffle-dancing once again.

Fifth, there was a concoction made to drink. Once it was finished being made in a big bowl, it was poured into a CLOROX bottle for storage. Most of it was acutally served straight from the Clorox bottle. The ingredients included, carnation evaporated milk, coconut, limes, and rubbing alcohol. No, that is not a typo. Rubbing Alcohol in the wedding drink. For external use only? Not in Haiti. 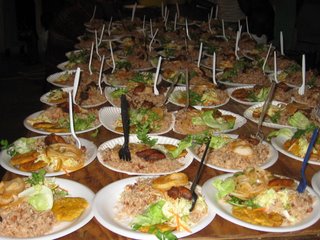 Now we must rest. Tomorrow we'll take our partial family to Port for church and then Easter dinner with some old (not applying to their age, necessarily) and new friends afterward.