No, not really uncut. That would offend far too many people. But, this is the Eddy, censored and changed to PG-13, partially cut, blog entry.

For newer readers, Eddy is the guy that does a lot of work for many missionaries. He helps make Americans legal to live and work here. He is sort of a jack-of-all-trades and a swindler. But, a helpful swindler.

This will be random, because Eddy is random. We spent an hour with him at the auto repair business yesterday and all of these things were said:

As we stood waiting for our truck to be repaired:
Troy- "Eddy, you said five to ten minutes. It has been 30."
Eddy- "Yeah man you gotta remember this is not your cone-tree man. We take time and we make it better, just like with the money man, we change it."

As we discussed seeing President Preval at the airport:
"Oh man, he is always drinking man. He likes to drink." (For the record, this is just hearsay. Probably, only Eddy thinks this. This is the highly edited portion of this blog, Eddy used colorful language to describe his presidents drinking habits.)

As we stood talking about the things that need to get done:
Eddy- "Tara (pronounced taaaawa) hey you know when I called you this morning you did not tell Troy to call me man."
Tara- "That was not me Eddy, I was in Port, you must have called Britt."
Eddy- "Yeah, yeah man, you gotta tell your daughters that they gotta change their voice man, Paige and Britt they have the same voice they gotta change that." (For the record, Britt does have the same voice, but Paige does not ... only Eddy thinks this.) 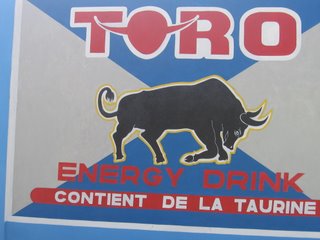 As we discussed Troy's love of the Haitian Energy drink called "Toro":
Eddy- "Man you know what they say about that drink man? It makes you want to go to bed man. Not because you are sick but because you love your wife. You always drink that Toro man, do you want to be with you wife so much? I see you that way man, you always drink the Toro."
(Toro is no different than any energy drink you buy in the States. It is salty and sugary and loaded with caffeine. It has nothing to do with increasing libido...only Eddy thinks this.)

As we further discussed the silly notion about Toro, this joke is told:

Eddy- "This guy my friend, he goes to the Doctor. The Doctor says to him, you cannot make love to your wife anymore. It is not good for you to do that man. I (meaning Eddy) asked my friend 'What are you gonna do?' My friend he said Find another Doctor immediately." ( 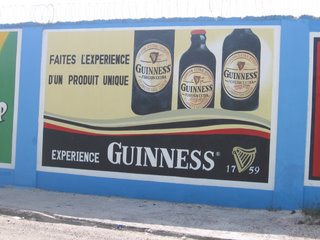 Hardy laughter and holding of the sides, by Eddy.)

As we (T&T) discussed the Guinness thing and Eddy overheard us:
Tara- "Eddy, what is Guinness? Is it beer?"
Eddy- "Guinness??? Beer??? No man, Guinness is not beer."
Troy- "Rony, is Guinness beer?"
Rony- "Guinness? Beer? No, no it is not."
Troy- "What is it then?"
Rony- "Just a drink."
(Why do they sell Irish Stout (commonly believed by most, to be Beer) in a third world country anyway? It makes no sense.)


Before he left the repair shop to pick up his daughter from school:
Eddy- "Hey man, they will fix it man, it won't be too long man. You just keep touching me man. I gotta go get my daughter."

We could not keep our laughter stifled at all of this crazy-talk. We just laughed right at him. He seemed to like it. Everyone should experience a little Eddy now and then.
at Thursday, May 18, 2006