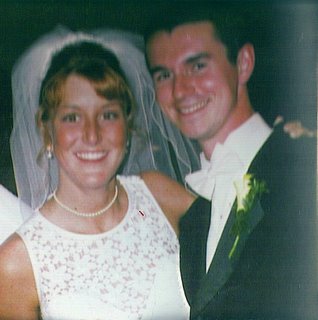 Troy- "Good morning Noah, guess what? Mommy and Daddy have been married for eight years today. Isn't that amazing?"

Really, he's right. Eight years is nothing to sneeze at. Even a two year old knows that. Our usual wedding anniversary plans would include a romantic night out.
That's not happening here, because-
1. We don't/can't go out at night and 2. There is nowhere to go.

Instead we have planned for a day in the very near future where just the two of us will leave (not to go to the dreaded city of Port au Prince) and spend an entire day just talking and sitting by the ocean. No kids. For an entire day. For the first time in ten months. That will be weird. And awesome.

I already wrote every mushy thought about my husband back here at this post. Today I don't have anything more to add...Except, Happy Anniversary Babe.
at Tuesday, November 14, 2006