Dad and Troy messed around with plumbing in one building and electrical issues at the gate. The electricity issues were caused by the 'steal one get one free' plan that some neighbors were using for electricity. The level of their skill (or lack of skill) caused a short for the whole compound and blew out the power for a while ... Troy had the guys dig a hole where he assumed the creative splicing took place, and sure enough there was a bundle of corroded wires causing the problems. 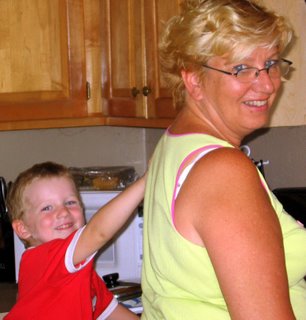 Mom worked on the homemade ice cream this afternoon. After seeing what making it from scratch entails, the $12 per gallon price at the grocery store, seems like much less of a rip-off. We are anxious to have it with birthday cake tomorrow night. To email the birthday girl you can use paigeinhaiti@yahoo.com 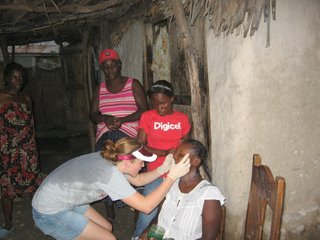 Britt (and Paige) are back in business, making house calls and checking in on their peeps. Here are some photos of a few of the people she saw today. Sadly, she has Porter genes and we all have a bit of a sweating problem ... as evidenced by the soaking shirt. She said a week in "cold" Cancun made her body forget how to cool itself efficiently. She will give the full medical report later, complete with wound photos. 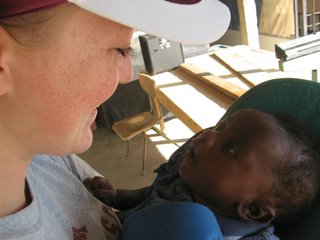 Troy is working on his 'golf in Haiti' blog, and has big plans for a golf video offering too ... but now that he had such positive reviews for his driving video, the bar has been raised and he won't just toss any old video on the blog, he wants to keep producing high quality products. Yes, there is a golf course in Haiti, and yes it is a surreal experience.

Have a great evening.