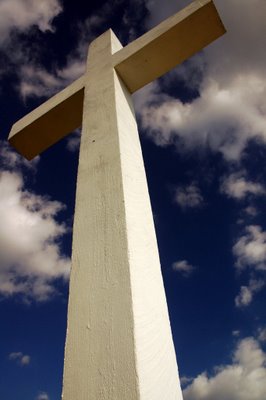 Many times since we arrived here we have been contacted by people who want to move to the mission field (not necessarily Haiti) but are not quite ready, or unsure where to begin.

I am always anxious to encourage, but careful to choose my words wisely. We did the same thing prior to moving. I sent emails to anyone I could find living and serving in Haiti, just hoping they would write back and tell us how to do it. I was over-simplifying of course, by thinking there was one right way to go about it.

The main advice I have is to be sure that you and your spouse are on the same page. We were blessed to feel equally sure of the direction we believed God was pointing us. At first Britt was skeptical. Paige was excited for the adventure from the start. We were lucky. I think it would be hard to make a move like this if your older kids were not on-board. Not that kids should rule the roost, but it sure is easier to have happy kids. Prayer changes things in this area. We did a lot of that when it came to our big girls.

The number one thing we did was pray for confirmation. We were unsure about finances, renting our house, what ministry to hook up with, what our family would say ... and on and on the list went. We began to act and move forward, always asking for confirmation that we were on the right track. God's timeline will be different for each family considering a move, for us it went quickly. The fundraising, renting our house, finding Lifeline, getting our family on-board ... all of that took place in about four months. We have friends who took two or three years to move, we both experienced God's timing.

The one thing I have observed living here these last many months; the mission field is not a place to hide or cover your insecurities. I have found any flaws in my thinking, my faithfulness, my approach to stress, anything that I struggled with in the USA is just magnified here. Anyone considering missions in the future might consider examining the areas they need growth or improvement and recognizing that in many ways, once you are out of your own culture, everything that is not so nice about you, seems to multiply and scream for attention.

Troy and I believe in spiritual attack, there are nights when I wake up feeling such a heaviness in the room or I have nightmare after nightmare. It can be suffocating. There are times when we cannot communicate well with each other and it feels like we are not even speaking the same language. There are times when we wish we could get away from here and we struggle to have good attitudes about certain tasks. Sometimes criticism can bring you down, the thicker your skin the better you'll do.

While the darkness and oppression is the exception, it still tests us when it comes. Our response to those things matters. If we don't take those opportunities to call on God and pray, we are missing out. If we don't nip it in the bud when we are snappy at each other, we are falling in a trap & missing out.

All of this is just to say, come to the field prepared for tests. Come prepared to drop to your knees and pray because it is the ONLY thing you can do. Come with a solid, healthy marriage so you can lean on each other. Come ready to learn the icky things about yourself. Come ready to grow.

The adventure part is really fun, but we're human so even that can get old. Don't come for an adventure. Come to learn and see what God wants to teach you. Come ready to work through the boring, and difficult periods. Maybe along the way you get to offer something really special to the people you are serving, in whatever country in the world, but mainly come willing to be molded without expectations of the impact you'll have. Leave the results to Him.

A few of you have emailed asking about how we found Lifeline and if Lifeline is looking for a second couple/family. We found four ministries that needed help last summer. We talked with all four and narrowed it down to Lifeline quickly. We based it on the job description, the location and the super-cool mission house with electricity and water. We are shallow. I know myself well enough to know I would not last in a hut for more than two weeks.

Lifeline has a second house and a position available for a family to move here and work. Troy and I report to a two-person leadership team in the States. They will hire the next family. If you are far enough along in your journey towards mission work, and are certain of your calling, you can feel free to contact Donald at Missionlifeline@bellsouth.net

We also have two private one-bedroom apartments for single people or a couple that might want to stay longer than a week, but not necessarily long-term. Lord-willing, 2007 will be a huge year of growth for the mission. The clinic is built and waiting for supplies and equipment. Once those items are here we will need a few super-smart and organized folks to help set up a system for the clinic, patient charts, record-keeping, etc. We are praying a nurse or doctor might consider moving down here to help for an extended period of time, training Haitian staff and overseeing things during the first many months of the clinics operation.

It is a myth to think you have to be super-spiritual giants for God to call you to the mission field. You don't have to be a Holy-roller for God to use you. The only thing you have to be is ready and willing. The article below is a good read if you're still skeptical.

P.S. The mission field is all around us, no matter where we live. You don't have to pack up and move to be a missionary.

There is a medieval saying you may have heard: "God draws straight lines with crooked sticks."
Have you noticed how candid the Bible is about its heroes? It doesn't whitewash the flaws and foibles of its characters. Abraham is not only the Father of All Who Believe but the scared rabbit who puts his wife in jeopardy to save his neck. King David is not only the Man After God's Heart but the adulterer who lies and kills a man to try to keep the affair from being exposed. Peter is not only First Among Equals in the band of apostles but the frightened fisherman who denies knowing Jesus of Nazareth in his hour of need Â? not once, but three times.

So how can these people be "saints" and "examples" to the rest of us?How are we supposed to find hope and encouragement from reading their stories? That question isn't too hard to answer.
For one thing, those stories in the Bible are about real people. And real people have weaknesses as well as strengths, bad days as well as good ones. For another, God knows everything and lies about nothing. So the Bible doesn't tell half-truths or gloss over human frailty.Finally, the full story gets told so you and I will understand that God is willing and eager to accept and include us too.

The purposes of God in this world are seen through by people who have clay in their feet. Always have been. Always will be.

Are you getting the picture now?

But I have met so many people who are under the impression they are hopeless or "too far gone." One woman told me there was no place in God's heart for somebody who had made as big a mess of her life as she had. A man just out of jail said he could never feel comfortable among "decent folk." What?

Joseph had a prison record. Sarah laughed at God's promises. Jacob hurt his family by playing favorites with his kids. Naomi and Ruth were widows. Job lost everything he had ever worked for. Jeremiah was depressed and suicidal. Rahab had been a prostitute. Noah got drunk.Moses stuttered.

Are you getting the picture now? Is it dawning on you that God doesn't have to recruit perfect people (there aren't any!) and will use just about anybody who is willing to trust him? That means he can use you.You. And you. Even me.

God does some of his best work through the most unlikely people. He draws some beautifully straight lines with some of the most crooked of sticks.

All of these people we have mentioned received God's approval because of their faith, yet none of them received all that God had promised.For God had far better things in mind for us that would also benefit them, for they can't receive the prize at the end of the race until we finish the race (Hebrews 11:39-40 NLT).