My title reads: Malaria is a good thing. And this is why:

Frequently, people come to the gate of the mission with fevers. Most of those times the person is actually a baby and is carried by mom or gran. And about 75% of those don't really have fevers. I don't know if it is people seeking freebies or if it just the general population's belief that a pill (or any medicine) can fix multiple problems.

This is the main reason why in the past I have always said 'cuts and burns and anything you can visibly see.' At first, I didn't have the medicine, but mainly because I don't have the time to sift out all those searching for real help or just for free-meds. But this week made me realize that there are some out there that really do need to get through the gate. So I am working on plans of how I can categorize fevers. That way the gate guys can determine if it's something that needs to be seen or sent on. I don't know if that will even work but I just pray that the people who have fevers and who we could actually diagnose and treat would make it past the guard's screening.

I started writing this post a few days ago and everyday I've added a new malaria patient! So hopefully finishing this post and publishing it will stop the trend of malaria that is going through La Digue. We are definitely feeling very thankful right about now for our decision to take chloroquin prophylactically.

Last week Carl (short term mission team) saw a girl out in the village who had a very high fever and her mother said she'd been vomiting. We did a test for malaria and it came back positive. Tuesday was Nyka's last day of chloroquin. I saw her today and she is doing great; a totally different kid. She was eating dinner and giggling on her front step. Bondieu bon! (God is good)

Monday, a Lifeline cook, Marielise, brought her daughter to us. The 8-year old girl had had fevers for a while but then they stopped suddenly. And then they returned Sunday night. She was running a 102.5 fever when I checked, so I gave some of the medicine that the team brought. They returned the next day and she still wasn't doing better, so I did a malaria test. It came back positive. Here is a picture of Marie Michelle today, her final day of chloroquin: 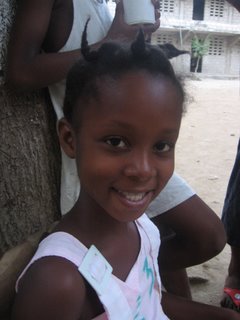 You must be wondering how I am testing for malaria, right? Well friends of ours who have an orphanage in Bercy (the same ones who brought the boy with the ear cut) gave us about 20 malaria tests. I don't know what they're called exactly ... but what you do is prick the finger, extract the blood, put it into the 'S' (sample) window and then put two drops into the 'A' (activator) window. I also don't know what the activator substance is exactly, maybe someone should tell me. But anyways, I've probably done about a dozen but these two this week were the first that came back positive. Two lines means it is positive for one strain of malaria and three for another. (The specific names are on a sheet of paper, but I don't have it right now) This is what Marie Michelle's positive looked like: 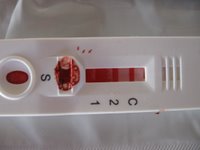 So since I originally wrote this post on Tuesday, two more people have been tested and both came back positive for malaria.

Mme. Maxo, who is four months pregnant, tested positive last night. She has had fevers and chills off and on throughout the week. She seems to be doing better today; I go out to the people's houses and give them the chloroquin -- it is safer (so the chloroquin doesn't get into the hands of a child - It's toxic for kids) and then I can watch them take it right when I am there so I know that they took it and the correct amount.

Today, Tiga, the four-year old son of a cook named Anite came. He has had fevers since Saturday and vomited today. His temp was 102.5. So we did the malaria test and it came back positive. He is so cute and one of my favorites. He is always around here and you can usually find him being a ham like this: 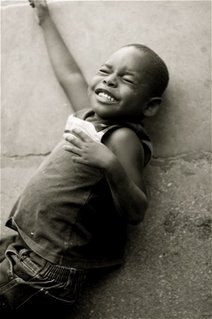 Like my mom reported, this has been a suture free zone. I am actually alright with this, it has forced me to get a ton of school done. A lot of my patients from the crazy week when Jamie & Sharon were here have all healed up. I have been meaning to take some after photos and post those, maybe I will later this weekend. Pierre, the one with the mangled finger/bad amputation job accepted Christ last Sunday. I wasn't there but I was really glad to hear it and excited to see him at church this Sunday. Some more good news, Pastor Silanse's abscess is almost completely healed up. Here is a picture from yesterday: (I started by using 4x4 gauze pads to pack it but now I have to cut 2x2's in half) 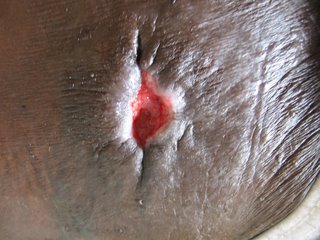 Also, a few of you have asked about Krispe. His ulcer opened up after a month of it being closed and wearing compression stockings. Here is a recent picture, it is kind of discouraging to see it back to where we started but it sounds like that the damage is done, he probably has permanent damage from parasites that originally attacked and lived in his veins. I think that a theory was that he has filarisis, but correct me if I am wrong and please give suggestions for what it might be, even if it won't heal ... I'd still like to know what causes it. I am going to keep wrapping it in the unna boots (does anyone have access to these or know where they can be purchased in the US? I can make them, but I still would like to know if buying them is totally out of the question) and try to get it close back up again, even if it is only for a month, it still means a month for him not to have bugs all around him. I also treated him for worms and he said that he vomited, so that means he had worms; I am glad that at least this problem could be cleared up. 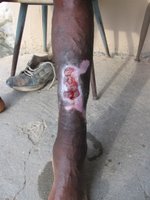 So ... rather than suturing I've been busy treating malaria this week. This seems like an easy-enough thing to diagnose and treat. Chloroquin is cheap. It's only a 3-day dose. Today we got more of these tests; thank you Cheryl & Rusty!! And it has been interesting ... watching the progression of the patients. I realize that this is something most people don't get to do (track the disease progression so closely) and I am thankful for the learning experience.

Well I better get to bed, I hope you are all doing well and staying healthy. If you think of it, please pray for our new friend Lindsay, she came down with a fever upon her return to Indiana and they are thinking either Dengue or typhoid.
at Thursday, November 09, 2006