End of the Day Shout Out to MI 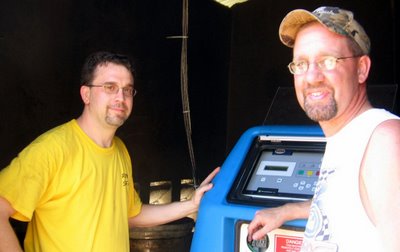 The group of 11 from Michigan, and 1 from Indiana pretty much rocked the house today, and when they rock the house they rock it all the way down. Above are the two wicked-smart (that is a compliment) electrician type guys, Mike & Steve. They worked in the inferno, also known as the generator room today. They installed the brand spankin new generator. Shhhhhh, if you listen carefully you can hear the money piling up that Lifeline is saving with this new machine in place. ;-) This generator is so much bigger that it will charge the batteries to a full charge in about half the time it took before.

Below is Merilien. Troy and Nate were being Nancys about this chicken that they found nesting in a box of plumbing supplies. They asked the chicken, nicely, to go away. They poked it with a stick, they did all they could ... but recognizing their weakness decided to bring in the big guns. Merilien walked over and grabbed it out of the box in one swoop, while Troy and Nate covered their heads in case an angry chicken attack took place. It didn't.

(Side note for all our peeps out of White Bear, MN (Go Bears!) ... doesn't Merilien look like the Haitian Jeremy Nietz? We think so.) 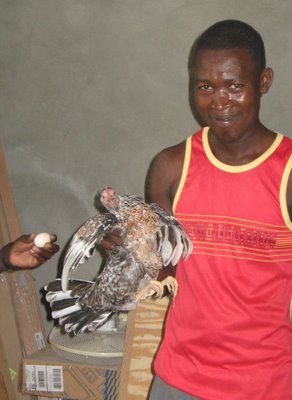 A entirely different variety of chicken(s)- 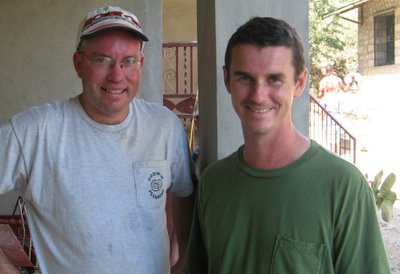 Sandy and Jenny painted in the medical clinic. Erin and Tiffany worked on sealing the wood on the playground equipment. Everybody else sorted medical supplies, treated patients, and began making lists for Lifeline of the items that will be needed in order to open the medical clinic next year.

Isaac never stopped talking all day. He has learned that his six person family only has about two hours of non-stop chatter tolerance before we say "Hey, can we take a break from talking?" I heard him telling Gerri today (while she was TRYING to read) "I love to chat, last night I was chatting with those young girls, maybe they will come up soon and chat with me again. That would be fun!"

This crew will sleep well tonight. We hope you do too.