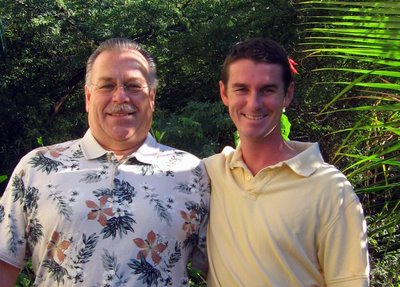 It is true. There is a golf course in Haiti. A very nice golf course at an exclusive private members-only association called The Petionville Club. I've been fortunate enough to meet "Mr. E." (don't want to give away the identity and ruin the chances of future rounds ;) - he is the director of the club and one of the nicest and most gracious people I've met here in Haiti. (Yes, I'm sure my opinion is biased by the fact that I PLAYED GOLF IN HAITI!!! but he is a very, very nice man.)

Above is a picture Tara wanted to take before we left. She said she needed to show us in our "golf outfits". I assured her that I had no such thing as an "outfit" for playing golf. Randy, however, does. In his defense, we bought this outfit for him as a Father's Day gift, and it most certainly is a "golf outfit". An acquaintance of Randy's, upon seeing the golf outfit on a course one day, said: "Some poor old Jewish guy in Miami can't go to the pool today because you're wearing his shirt." We've gotten a lot of mileage out of that joke. 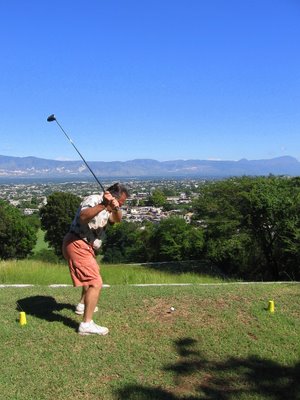 The golf course is amazing, especially considering what I had expected before arriving. I had pictured a sandy rocky field where you hit balls back and forth. It is a very nicely laid-out course with many hills, large trees, and green grass everywhere. Mr. E. said it is currently in it's best condition ever, and I believe it. Even if we hadn't played golf, I still would have counted the trip worth it just to see and walk on so much grass. There are a couple interesting holes where you play them out of order and use different tee boxes for the same hole...there are 8 actual holes total, I think, and some different ways to play to turn it into an 18-hole round. We were a bit confused at times, but always got straightened out by Fahi - my caddy, and Frenel - Randy's caddy and the club's caddy-master. These guys were great. They are both great golfers, judging from their practice swings, advice, and example shots they offered, speak enough English to give us a hard time about our poor play, and were amazingly skilled at club selection. On the "front nine", Randy kept looking at the clubs Frenel would hand him and say "You gotta be kidding me." But Frenel was right every time, so eventually Randy gave up and just trusted his caddy. Just like being on the PGA tour. I never looked at my clubs, just trusted and knew that Fahi knows way better than I do. 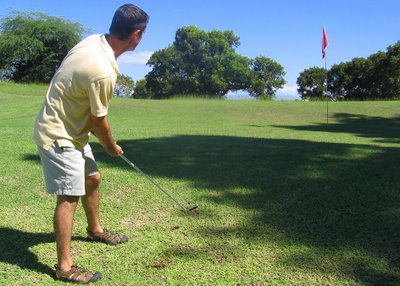 We had a great time and actually played pretty well for a couple of hacks like ourselves. Even after being there, I still can't believe there is that much real estate tucked away there in the hills of Petionville. I had no idea the course would be as big as it is. All sides of it are surrounded by cinder-block walls with razor wire on the top, and there are the crowded concrete homes of Port-au-Prince pushing right up to the walls outside. As always in Haiti, the views were beautiful, and the contrast between the beauty and the despair was hard to take in. It is one of the most surreal experiences I have ever had. Below you can see the mountains across the bay from Port, the Caribbean Sea, the homes of the capital city, and Randy hitting from a terrible lie. 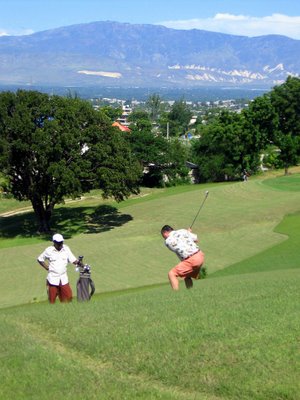 A big thanks to Mr. E. for the opportunity to play at his wonderful club, to Randy for footing the bill, and to Tara for shouldering the extra load while we were away.
In the States, we always said golf was "a good walk spoiled".
Down here, I don't think anything could have spoiled an escape from reality like walking across a grassy golf course in Haiti.

Stay tuned for the video version, and the next golf-related Kennedy installment.
at Thursday, November 30, 2006