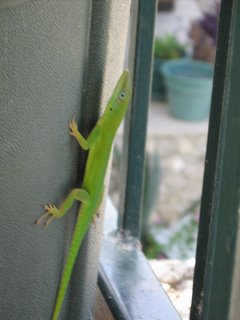 According to Blogger, this is the 500th post to be published since the inception of the Haiti WebLog. It seems like I ought to have something important to say. I don't though.

The lizard to the right caused a few seconds of joyful celebration for our boys. They failed to catch him. We had never seen one that green.

We were talking on the way to Port on Sunday, we realized it was one year ago this week that we went to our Pastor to tell him that we had been praying and had this strange feeling God was calling us to Haiti. He was the first one we told, just to check and see if he would tell us we were nuts. Then on the first of August we started talking to Lifeline. A lot has happened in one year -- and fast. 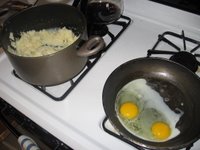 We have just consumed a gourmet meal of instant mashed potatoes and fried eggs. An odd combination? Sure, sure to some maybe. But you've got your carbs and your protein so it really only lacks vegetables.

The last several nights we watched Band of Brothers, the HBO mini-series from a year or two ago. People of our generation are so clueless about the reality of the sacrifices those men made. It was very good, if you haven't seen it is worth the rental fees.

Beth has now hooked us up with seasons 1 through 4 of Alias. I for one, am skeptical but entertainment is entertainment so we will give it a try. And since my friend Lisa informed me that it sounds horribly dorky that I am researching (and enjoying) idioms, I want to be careful not to become a huger geek.

She said idioms are not a hobby and I "need to get one", she even said: "You can't teach an old dork new tricks." I beg to differ. And in response I say "Lisa, we are at loggerheads over this one and having my best friend from the fifth grade turn on me -- well, it cuts to the core of me... I would even say things with us are as black as Newgate's knocker. ;-)
at Tuesday, July 25, 2006