Watch Out for Falling Rocks

This older, very thin gentleman showed up with a problem that resulted from being nailed in the head with a rock. Ouch.

He said that maybe the rock was thrown by a child trying to get a mango out of a tree but it landed on his head as he worked in the field. Ouch.

Britt was laying on the couch contemplating a nap when he showed up. She went out to take a look and decided to give it a shot. She came up and got all of her supplies ready. She went back down, to find Krispe waiting for her too. 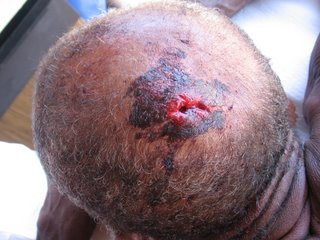 She took care of Krispe and together we began to clean this man's head. I get a tummy ache. I can help, I can deal with looking at it, but it is far from my favorite thing. He was covered in dry blood so she started scrubbing it off and working her way in toward the cut. After a few minutes she looked up and said "I cannot do this today." Back to bed she went and we loaded this poor soul in the truck to bring him down to the lady that does stitches for the big bucks. Britt gave it the college try. She hates to miss out on blood and guts but you can only do what you can do.

It was nap time so I went with Troy-boy to drop head-wound guy off. I said "Hey, on the way 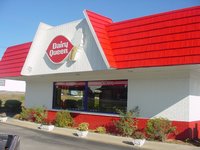 home it will just be the two of us, a date!"

Troy had to wreck it by saying "Yeah, what do you wanna do? Stop at DQ or something?"

What a butt-head. Now I cannot stop thinking about mint-oreo Blizzards and hot fudge sundaes.

In unrelated, inconsequential, and random news:

Have a good weekend. Hit the DQ on our behalf.

NIV Study Bible thoughts from Revelation 22:17 - The Good News is unlimited in scope--all people everywhere may come. Salvation cannot be earned, but God gives it freely. We live in a world desperately thirsty for living water, and many are dying of thirst. But it's still not too late. Let us invite everyone to come and drink.