Here are the happy clams. Isaac has been begging and begging to climb the hill behind our house. It is the hill where much trauma occurred when he fell into a patch of thorns in March. Ever since then he has been slowly building confidence to go back up there. Today was the day. As we were walking back down he announced "I'm a TOUGH guy." But the spot where he made that announcement was prior to a few more patches of thorn bushes. A few seconds later, very quietly to himself, I heard him saying "relax tough guy relax" over and over. :) 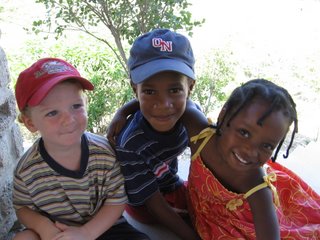 These are the people that visited us just for a few hours today. Dr. Mark and his wife Kathy. What a blessing that was, they were so neat. He is a dentist by training but then he added EMT and other medical training because he loves Haiti and wanted to do more. His wife is to the left as you look at the picture, she has a role in their work here and helps with accounting and record keeping and all the details. She was so cute. They were hip. To the left of her is a young woman who hopes to move here next August to run the orphanage that is associated with the medical clinic that Mark & Kathy run. They live in the states but travel here four times each year with medical teams. We are hoping that once Lifeline has its clinic in operation we can work together and help each other out. It is always encouraging to meet new friends. 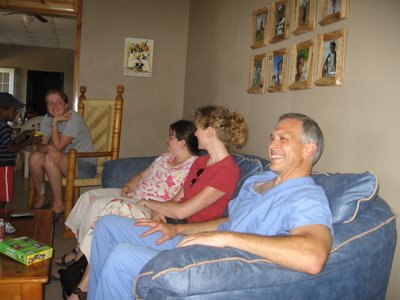 Lisa (our one-woman team) got the tour of the village and then went over to another feeding center to check that out. She is working towards teaching English abroad so we are going to help her use her skills before she goes home. I don't have a photo of her yet. Coming soon... she is hip too. We're surrounded by hipness this week.

One lady that introduced herself to me today by email, asked about our adoptions and how we ended up here. Condensed version: I can share that we wanted to adopt from Columbia first. But God had other plans and Columbia told us to kiss off. We ended up in Haiti. Our kids came home to us in six months, a very fast adoption. After that there was a big nightmare scandal with our orphanage. That story could be told over and over by many who have adopted here ... but once our kids were home there was this seed planted ... a seed of love for the country and the people. We figured some day we would come back and do short term stuff or something like that. We had no idea God would work on us the way He did in 2005 but here we are. The Lord made about 20 major details and roadblocks fall into place in the span of 5 months. God does what He wants. Sometimes it is weird and makes no sense to our little earthly brains. I'm glad though. Because He seems to know what He's doing.

Blog Thoughts- I will keep it real here. Sometimes that means I am really up, other times it means discouragement. One of my biggest pet-peeves is fake Christians who always have everything looking all wrapped up and nice. I am just a jerk sinner that Jesus died for and forgives. Nothing more nothing less. I don't think of myself as a complainer (I was shocked to know someone did) but I did just have a hard month that included three cases of Dengue fever for three people in a span of 33 days. So maybe I took on a negative tone?

The fact is, I am here to be taught something (lots of things) by my Heavenly Father. As are the other members of my family. Our being here is as much (and maybe MORE) about God changing us as it is about us making any tiny dent of a difference to Haiti and her people. (Click here for previous thoughts on that.) Change me God. Let me be new. That is my prayer. Goodnight. ~Tara 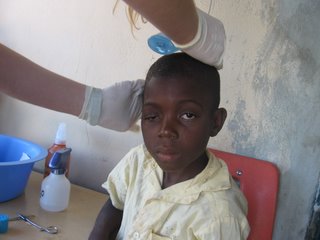 This is a sad little guy who came this morning. He is 7 and I've seen him before ... he is the little brother of the lady from a while back with the large machete cut on her arm. Troubles run in the family. He was up in the mountains with his dad when a rock fell and hit him. That was on Tuesday. The dad put a combination of dirt and toothpaste on it so that when I came to look, it was just a bunch of black, crusty lumps on his head. Can't put a bandaid on that! So I began to pick off the crustified junk. There was a lot of it. This is pretty common here, they use toothpaste to dry up scrapes & cuts and this one probably bled like crazy so maybe the dirt was to stop the bleeding. 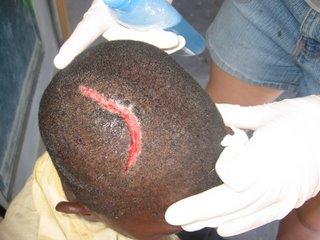 Once I cleaned it all off, it looked like this. Wow. I so wish he would have been able to come two days ago and had it stitched. He also has a problem with his eye, if any opthamologists are headed down here -- let me know! He seems so sad, I hope that by lovin' on him this week when he comes for bandage changes that I can try to get him to smile and feel a little better.