Britt is off for another few days in Cazale with Lori and Licia and Family. She went back and forth about going because she still has a few days of school work left, but in the end the lure of the excitement down there was too much. She loves them and she loves to learn.

Yesterday when we returned from church at 6pm, we saw Krispe sitting waiting for Britt up by our house. Troy said to Tipap "Has Krispe been here long?" Tipap said "just since 2pm." We felt bad, but when we pulled in he grinned and waved. Britt got out of the truck and said "Bon Swa Zanmi Mwen!" (Goodafternoon my friend.) 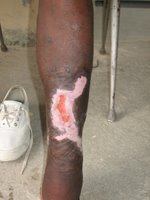 Troy and I know Britt is a good kid. We know she'll go places, but this particular situation has us standing in amazement. We had no idea Britt could (or would) do what she is doing with Krispe.

Since April, Britt has washed his often smelly, infected leg, three or four times a week. For months, she has worked on getting his wound to shrink and close-up. (and it has shrunk significantly) Neither Troy or I can honestly say we would have stuck with it ... the job is not glamourous and it is time consuming.

When she left this morning for Cazale she gave me very specific instructions for changing Krispe's bandage on Wednesday. Then, after the verbal directions, there was a note left on my keyboard with more instructions. I don't think she trusts me. ;)

The changes in Krispe's demeanor are the ones that are most exciting. After Lori encouraged Britt to stick with him and keep working on it, Britt started trying to learn more about him and to draw him out. Back in April he would not make eye contact and he would barely speak, now he smiles and waves and follows instructions and seems to care about getting his leg to heal.

When you take a 16 year old to a third-world country, you just hope and pray that they won't hate you for it someday. We came here with her willing to come, but we were still nervous that she would want her friends and normal USA life back.

We are so thankful to our loving God that this 16 year old is willing to work hard, be obedient and happy wherever God puts her. God is good like that.