Haitian Proverb:
Min anpil, chaj pa lou.
Having many hands, the load is not heavy. 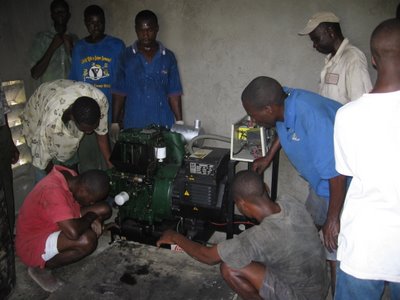 Today the original (rebuilt and repaired) generator returned to a new spot in the generator room, making additional space for when the new and improved generator arrives later in the month. Troy spent his day working on that project.

Noah spent the day stripping whatever clothing was put on him, off. His rash on his back and buns is really bugging him so he has decided that naked is the best way to cope with it. Laying on the tile floor nude is also Noah's preferred method of cooling down. Poor guy.

We have a new evening obsession. A friend gave us the first season of 'LOST'. Last night we watched four episodes in a row. It made it hard to sleep ... that show is scary! Troy's idea of funny did not calm any nerves. When he went out to lock the gate, he jumped up at me through the window on his way back in. Funny to some, not so funny to others.