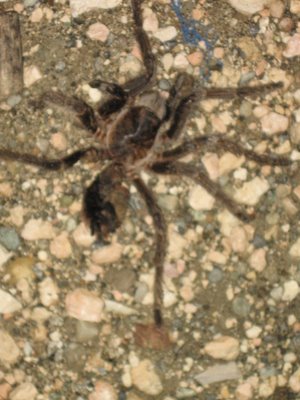 Last night, Dad found this (dead) in the driveway. I was thrilled to be able to poke at it and examine it.

Who just finds a tarantula lying in their driveway? I dig it! Paige wasn't so sure. I think she thought I was crazy. (maybe so)

I read up a little bit on our furry arachnid friend. Tarantulas are venomous but generally are not dangerous to humans. You can have an allergic reaction if they bite you, similar to that of a bee or wasp sting. They have to be irritated or afraid to bite, they don't just come after you. 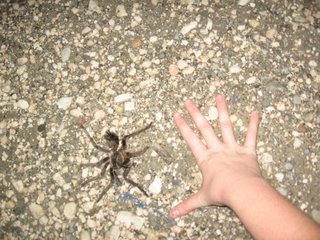 I still would like to see one alive, but that is not likely since most of their time is spent in their underground homes. I guess around here they live in the dark corners of the garage and surrounding cement.

Also while google-ing, I found a bunch of chat groups devoted solely to tarantulas. Who knew people were so enthralled? And I was feeling really weird standing there staring at it for the eight or so minutes. I read about one guy who has over 500 in a 'farm' housed in a bedroom of his house. That's not for me!
at Saturday, July 08, 2006