Independence from Eddie Day and the Scientific Method

I know we've posted this picture before, but I don't have any fresh ones, and I felt you needed to see him again to fully appreciate the following story. Plus this picture really captures the true "Eddy" (as he spells it, and then he always says..."like Eddie Murphy". Except Eddie Murphy is spelled totally different. Oh, and his real name is Bob, which to me makes him even funnier.) 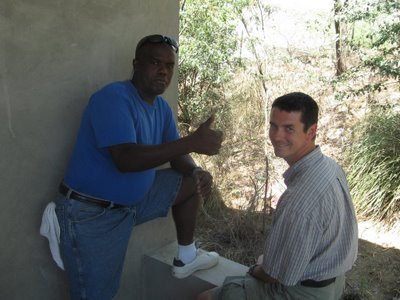 Wednesday I bought the new batteries for our house in Port and negotiated a price for the new generator. I decided to perform an experiment. Using the scientific method, of course. Purpose: Figure out if we really need Eddie. Hypothesis: I can do just fine on my own, saving time, frustration, and possibly money. Theory: Eddie isn't necessarily always looking out for our best interests above and beyond his own, and he is not nearly as influential as he'd like us to think he is.

Usually Eddie likes to be along for those big business dealings, I'm sure so he can work some side deal with the business ( I can just hear him..."Look, man, I bring you all these white people to spend money at your business, man" etc.) I decided to go it on my own, conduct some business in Creole, without Eddie or an interpreter, and see how it went. I'm calling it my own Independence (from Eddie) Day. The Experiment had two parts:

1-Negotiate price for batteries, pay with American check or exchange funds to Haitian money to pay for them, locate the loading docks, get them loaded, and make sure I had the proper receipts and paperwork. No one I dealt with in experiment #1 spoke any English, and I had to speak with at least five employees to complete the transaction.

2-Get bids for purchase price of two different generators (for comparison) from Haitian Tractor, the business we are currently renting the generator from, try to negotiate on price and possibly place an order, find out about professional installation and availability of selected generator. My main contact there does speak English fairly well, so that makes things easier.

Here are the results: (Analysis)

Experiment #1-The last time we purchased batteries for an inverter, it was for the new house/building. That was a few months ago, from the same business. I was not able to write a check from a US bank, and we lost a couple hundred dollars in the unfavorable exchange rate. Eddie negotiated that "deal" for us. This time, on Independence Day, I paid $15 US less per battery, talked them into accepting my check (thus sparing us the exchange rate penalties), and had the batteries in the truck and out the door in under two hours. It took almost a whole day with Eddie last time.

Experiment #2-I had prices and spec sheets in my hands in about five minutes, made a selection, and began discussing terms. Negotiated the price down somewhat because of the rental business we've brought them. Found out about installation, and shipping/ordering terms. I was out of there in fifteen minutes, feeling pretty good.

Here's where #2 gets interesting. When I was done with my business and about to leave town, Eddie called me and asked how things were going. He was surprised to hear that I was done and on my way out. He had some paperwork to give me, so we arranged a meeting. After the usual Eddie salutations and braggadocio, he asked me if I bought a generator. I told him no, and he was happy to hear that because he "knows the owner of Haitian Tractor, man. He's like a fwend of mine. I can make appointment with him for you." I told Eddie I didn't have time that day, but if he could check that out for me I'd appreciate it. I let him know what generator I was interested in, and told him to see if he could get us a good deal.

Eddie called me back two hours later after meeting with his "fwend", the owner, and gave me his best price on the generator. He sounded very pleased with himself when he told me the "deal" he made for me.

It was $600 US dollars more than the deal I'd already made.

Conclusion: Thanks Eddie, for what you did do.

Score another point for the Scientific Method.

I'm checking on our old generator's status tomorrow morning, and possibly going in to pick it up. Guess who I'm not going to call?