1. The Lord's Prayer border in the kitchen is done. It went really well until the wall space ended at "For thine is the kingdom and the power and" ---- that seemed like a bad place to end the prayer. The single greatest motivating factor in my life is a finished project. I don't need anything but the satisfaction that I finished. Two cases of Dengue and a trip to a funeral got in the way of my goal. What began on June 9 is now officially complete. Thank you very much. 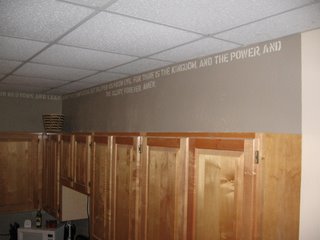 2. Britt-Had a bad few hours last night but seems to be back to moving forward, rather than backward. Thanks to all of you who are praying specifically for her. We look forward to the day she wakes up to find she is done with this.

3. All of a sudden, there are 44 million bugs in the house. The mosquito's are plentiful. The super mosquito killing machine cannot arrive fast enough.

4. Did I say Peanut was a smart dog? I meant emotional and naughty. She is the punisher and we were punished for not letting her sleep with Britt last night. We were attempting to keep Britt from being kissed and bothered all night long. Peanut must have helped herself to the refrigerator & cupboards because there is no other explanation for the volume of punishment she created. When she is upset, she does not kid around. We got the message and the beast will sleep with her master again tonight. 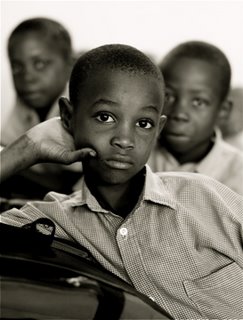 5. Troy had an opportuity to teach a local man what the term "beggars cannot be choosers" means today. The guy came asking for money for uniforms for school children. Troy did the math and found the amount to be obnoxious and inflated. He said "No, but I have fabric sitting in the warehouse that you can look at." The guy looked it over, went through it thoroughly and as he took what he wanted and what would work for sewing pants and jumpers, he mentioned that the fabric was not exactly what he was looking for, he prefers a tighter weave ... or something annoying like that. Troy did not allow his head to explode but rather explained that when being given something ... you should consider receiving it well and without a gripe. Troy is at the end of his tether with this particular gentleman, so he *might* not want to come around with requests anymore.