“Learn, but do not give in to the voices of defeat, and discouragement.” ~Rick Porter


Things are rolling along pretty well here. Troy and the School Director, who are often like chalk and cheese, seem to have spent an entire day together without any upset. The bonus of the day is that they found almost all that they needed on their excursion to Port au Prince. 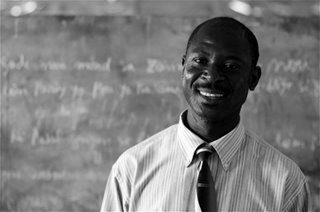 The School Director is possibly the most impatient Haitian man on the island. Should you be both Haitian and impatient? It’s oxymoronic if you ask me.

Last week we (the director and our family) taught each other a few things. Namely, we don’t come when snapped at, and neither do our children. As it turns out, snapping is not rude in this culture. Troy explained to the School Director that he had surprised Paige and Hope when snapping at them repeatedly and that snapping is reserved for dogs where we’re from. He seemed to track with us and said he would not call them that way again.

The snapping itself would have been tolerated and accepted as a cultural difference if it were not for the tone and demanding way in which he asks for Troy’s attention. He is not jovial, personable or exceptionally nice. If you are one of those things, THEN you can get away with being impatient and grouchy.

He does a good job directing the school; he knows his job. He just does it in a way that pushes our buttons. It is one of those live and learn and grow sort of situations, for all of us. He probably finds our approach to things every bit as annoying as we do his.

I think of the many things I have realized in the last year, it is that you really cannot be best buddies with everyone. Just because you consider yourself a follower of Jesus Christ, it does not mean everyone you meet of the same persuasion will become your friend. Not only will you possibly not click, they might not even like you. Your chances of having a non-believer dislike you are even greater.

Before we left for Haiti I had a very close friend decide that she wanted nothing to do with me or the kids and sweet Troy-boy anymore. Not that she came out and said that, but her actions spoke volumes.

When we let others know what we believed God was calling us to down here, she was strangely silent. She stopped calling, stopped returning my emails and just sort of faded out. It’s not like she was an acquaintance, she was at one point a very close friend. I was hurt. I did not understand it. Another mutual friend told us that she had told him “We were nuts to move our family to Haiti” and that is how I learned what her issue was with me. I emailed her and called to try to chat about it or whatever else was going on - but I got no response.

I think about this every so often. I think about whether or not it should matter to me. Of course it hurts, but should it matter?

My dad, the king of cheesy, used to say some goofy thing about pleasing some people all the time, and all the people some of the time … but not ever being able to please all the people all the time. He also said, “You can pick your friends and you can pick your nose but you can’t pick your friends nose.” I had a deep well of wisdom from which to draw. ;-) (And there is more where that came from. Look him up when you’re feeling down.)

We recognize some choices we make in life are not popular. We cannot expect everyone to agree. Yet, every once in a while I find myself thinking “Huh, I wonder what so and so thinks?” Most recently I was wondering if a certain person approved of our decision to adopt Hope’s sibling. After wondering I usually slap myself and think, 'why do you care you weak and shallow girl?'

I don’t think this struggle is mine alone. Everybody wants approval. There are certainly voices that you should totally ingnore. But how do you figure out what voices matter and what ones are just chatter and a distraction? How do you openly allow for wisdom and sound advice from good and wise people?

I know some neat people who adopted this cool little boy with HIV. I guarantee they were following God when they did that, but just as assuredly I would bet they had people chattering at them about it. Trying to bring them down.

This (article below) is simple, nothing profound, but worth sharing. From a church web-site come these simple truths. I appreciate the balance it offers.

It takes courage to be led by God’s Spirit. It’s not easy to break the mold in your family or step outside the boundaries others create for you. When you do you will face criticism. Jesus did. When they said, "Is this not the carpenter’s son?" Mt 13:55, they were saying, "He should stay in his place." They will say that about you too.

Two kinds of people always fail, those who listen to nobody and those who listen to everybody. Paul writes: "Each of us will give an account of himself to God," Rom 14:12. In the final audit you will answer to God alone. In that day you will discover that not only is it wrong to be judgmental of others, it is equally wrong to let the opinions of others control you and cause you to miss your destiny.

Too often our actions are dictated not by a sense of purpose but by a need to please. We care so much about what certain people think, that with every step we look over our shoulder to see whether they are smiling of frowning. God says, "You shall have no other Gods before me," Exodus 20:3. "But I don’t worship idols." You do when you dedicate your life to impressing people rather than obeying God.

Remember this, you are a child of God and as such your first responsibility is to please Him. Your second is to live your life to the fullest. Living on purpose is the way to really live; anything else is just existing.

We are continually open to hearing from older, wiser, more experienced people. In all areas of our life. We know we have room for growth and we want accountability.

But, as my uncle said, "If the 'advice and encouragement' doesn’t smell of the love and support of Jesus, then it is probably really condemnation and it is coming from another place, because “There is now therefore no condemnation to them that are in Christ Jesus.” (The other wise Porter man with great and helpful advice - my dad's older brother.)

Now- If you take only one thing away from this long and winding brain dump, just remember ... You can't pick your friends nose.