The Time Vacuum that is Port au Prince

Written jointly, by Tara and Troy (Tawa & Tchoy if you ask Eddie) 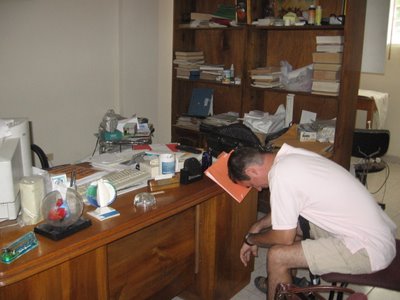 If there were a contest to see how inefficient one could be, it would be a fiercely contested battle. There are sooooo many contenders here. Today, not of our own free will, we joined the fray.
Above is a photo of Troy after two and a half hours of waiting for a five minute interaction with a Doctor. I only cried twice though, so all in all it was not so bad. AAAAGGGGHHHH!

To make a decision to reduce the school work for a day and go into Port with Troy is no small thing for me. I hate leaving, I don't love messing up the good school routine we have going and I really think Port is the armpit of the country.

Today we deemed it necessary because we need to finish my "Permis de Sejour" which basically says I reside and work here and am doing it legally. That will help us in our adoption. We also wanted to get our blood drawn for lab work and get that adoption assignment crossed off the list.

Sounds simple enough, yes? It would be if it did not involve people, Haiti, or efficiency. After today I now believe that each and every adoption (or any function that requires paperwork and a government agency) is nothing short of miraculous when completed.

First we needed to go get a letter that said "Tara Porter-Livesay" of Zimmerman, MN is healthy. We figured that would involve some sort of exam, short health history, maybe a little blood. No, no, and no.

It involved waiting from 9am until 11:30am in the atrium of a medical building on Delmas. The first tears were more about wishing I had coffee and being tired of sitting in a fish bowl being stared at for hours. If there had been a Starbucks next door the whole emotional breakdown could have been avoided.I finally just fell asleep. When I woke up Troy was across the room trying to find out what in the heck Eddie had signed us up for.

Eddie explained that "all" we needed to do was pay the receptionist, and wait for the Doctor. He then left multiple times to handle business for other missionaries who have been tricked into his Ponzi Scheme. One of them showed up to get papers/hand over money at our location. Eddie said - "I'll be right back, I have a David. He's from Mennonite." I saw him (The David from Mennonite) through the glass doors of the medical clinic, and pitied him. Then I realized I may as well have been looking at myself. We both apparently have "SUCKER" tattooed on our foreheads.

The Doctor finally called us in (to the office photographed above, organized/impressive digs huh?) and wrote down my name and my Minnesota address and handed me a piece of paper that said I am healthy. In return we paid him the equivalent of $18.00 U.S.

That step was the step Eddie said would take 15 minutes. It ended up taking 2.5 hours. My favorite part was when Eddie said "Oh we can't do this Taawa is not have patience for this." Apparently my lack of amusement at the 2.25 hour mark is an indication of some major personality flaw.

Next we went to "Xerox" to get copies of my passport. That looked a lot like running around in circles. First you go to a guy sitting on a stool at a copy machine. Then you get an order written up by someone else. Then you get your copies. Then you take your order and go to a different counter and pay. Then you take one copy of your receipt and walk it back over to the guy on the stool at the copy machine. It makes perfect sense really.

It was noon and we had had zero caffeine and were feeling the hurt. We ran into a store and grabbed pop and candy. (Yeah, yeah, we are pillars of good health, remember?) The man at the store bagged our two Pepsi's and three candy bars in three different bags. Why? Because it makes no sense and that is the one consistent thing here.

Then we drove to the get a new passport photo for me to use for my permis du jour application.

It was about 109 degrees at that point, making me less than fun to be with, or so Troy says. When we went into the "photo" store they offered me a navy blue men's blazer to wear for the photo. I declined. Then he had me sit against the white wall. He pushed my shoulders back against the wall, then pulled me forward to the exact place I had started. Then he tilted my head to the side, then he returned it to the same spot. Last, for good measure he put his hands on my temples and acted like that had changed something, then he picked up his 1971 Polaroid camera and snapped a photo.

After our photos had developed under the hairdryer used to speed things up, we paid for them and went to Immigration, just a few doors down. Eddie assured us this was a thirty minute stop, tops. That should have been our indication to run for the hills. After waiting outside long enough to be drenched in streams of sweat starting at the nape of my neck and making it to my waist before finding dry enough clothing to soak into, we got into an air-conditioned office.

The office had six uniformed government workers sitting around doing nothing. The man who took my file of papers looked less than thrilled to have a customer. Outside the door approximately 400 Haitian people sat waiting to get their own passports, to get out of Haiti ... we walked into an office where no line exists because we want to get permission to stay in Haiti.

The guy begrudgingly began filling out the form. He asked me to write down my mom and dad's names. Troy and I later wished we would have put Minnie and Mickey Mouse because the guy never would have noticed. He was copying letters, not reading words. For fun, I changed my blood type. Today I was B+. He asked me what I studied in college ... why that is relevant???? He looked me staight in the eyes and asked me what color my eyes were. It went on like this with the application for about twenty minutes. Some of the delay was caused by his distraction. In his drawer he had a cold bottle of Guiness. He sipped off of it at least every few questions. Hydration is important in high temperatures.

After we had it complete we went upstairs to a different office where I was fingerprinted and they took another photo. Then we were escorted back downstairs, where we sat wondering why we were sitting and I cried again, (this time for no known reason.) Then we had to go to another place to pay for whatever just happened, then we were done. It was 2:15.

After the second round of tears Troy told me that my intolerance for Haiti and lack of sleep are directly correlated. No more 1am nights prior to a trip to Port. Lesson learned.

We grabbed a couple groceries and made a phone call to find out that the Doctor we were going to have do our lab work is in the D.R. on vacation. Terrific.

Our adoption fees include making sure John has all the diet soda he needs, we delivered him 32 cans of Diet Coke and got to hear more about his visit with Hope's birthmom and talk about what happens next. Beth just returned from a week in NM and had Sam's Club Meatballs for us. The hour chatting with them and the meatball sandwich made the rest of the maddening day melt away.