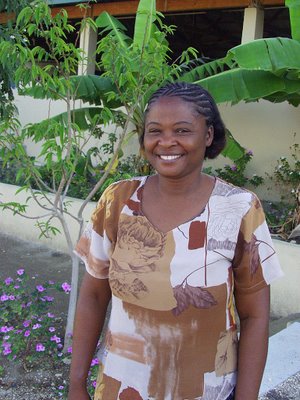 The funeral for Madame Bozor took place this afternoon. We learned from previous Lifeline missionaries that she had been with Lifeline for quite a long time and was once a co-director of the school.

She leaves behind a 17 year old son, who she basically raised alone, and her husband who resides and works in NewYork. Additionally, she has a HUGE extended family. Her siblings alone could have filled up the first two rows in the church today.

As is the norm in this culture, (I need an Anthropologist to explain why) the 2pm funeral start time, actually meant 3:30-ish. Time is not important here. It would drive most Americans batty. I would love a better understanding of why it is SO important in some cultures and SO NOT in others. There is nothing rude about being late. There is not really even such a thing as "late."

The church was packed full with no standing room, we stood outside and never went in to view the body. We estimate that more than 150 people stood outside the building during the service. People came on tap-taps and in busses for the next hour. (Refer to paragraph above.)

When we arrived and parked about a city block away we could hear the screaming. Someone asked why Haitian funerals are so different. There is not a short answer. I can give you some examples but I don't know much about the traditions or belief(s) behind the cultural behaviors.

All people are shaped to some extent (a large extent in my opinion) by the culture into which they are born. The human expression of grief and mourning is no less a product of culture than marital or religious customs. Culture is made up of the beliefs, values, behaviors, traditions, and rituals that are shared by the people of that group.

It helps to remember this, from an article on-line...

"The terms grief and mourning are often used interchangeably, but they mean different things. Grief is one's inner and personal experience of and response to loss. Mourning is the outward expression of that grief and includes the cultural practices and customs that follow the death of a loved one. Bereavement is the public/community acknowledgment of death."

The main things that are different:

Screaming or Wailing. Not crying or even sobbing, it is more like screaming. Today we could hear it from a block away. Not everyone does this. More women than men, but some men too. It almost seems expected of the mourners. (There are also expressions of mourning that are more "normal" to us ... crying or hugging a loved one.)

Also, for example, we know if someone dies in the village from within our house. The entire village starts wailing as the news spreads. It is probably so odd to us because the news of a death would seem to us to "hit" each person differently, yet it seems that the Haitian response is that many, even most, respond the same way at the same time.

In thinking about this we can only apply our own experience with death. When a loved one dies our crying and outward expressions of grief come in waves, mostly unpredictable. In Haiti, it seems as if a loud and upset response is expected at certain times after someone dies. Especially when the news is first received and then again at the funeral.

Fainting. People just drop to the ground, and then need to be picked up and carried out. Today we witnessed about six people being carried out the side door of the church after they fainted from grief. It is like a full body expression of sadness.

We probably would not have been missed today, as large as the funeral was. Thankfully, we did not feel like such a distraction, as we did at the last funeral. We are glad we went and were able to learn more about Madame Bozor through the previous Lifeline missionaries. Paige opted to stay home, she decided she wants to remember the Madame Bozor who loved and hugged her in her feisty, fun way. She did not want to see her with burns or deal with the whole funeral scene. We think she made a wise choice.

We went to show and try to say, 'She mattered to us, we loved her.'