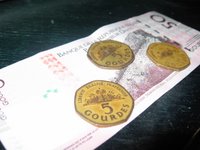 Ever responsible, we stayed up watching the first two episodes of "24" Season 2 last night. After that Troy could not fall asleep until 2am. (That is the greatest show ever created.)

The normal wake-up time is 5am to open up the doors for the canteen and get the cooks started. And after short nights like this - back to bed for a bit.

So, at 5:20 when there were chickens at our window clucking - they were in trouble. It seemed like they were using a mega-phone, they were LOUD. Troy was ready to kill. 3 hours and 20 minutes of sleep is not the optimal time to wake him.

First, he went to the window and said some of these things:
-Chickens, shut up.
- Chickens, go away go away go away.
-Chickens I will kill you.
-Shhhhhhhhh or I'll wring your scrawny necks.

Then after the fourth time he went to the window to yell at the chickens, I said "Go out and throw a rock at them."

Troy liked that idea. Not having any rocks in the house, however - and not wanting to run around the yard in his underwear.... He came back in and grabbed the next best thing available at the time: 4 Gourdes. (1 Gourde = 2.5 cents). They were the only readily available chicken-removing-throwing devices. He whipped the Gourdes at the tree until he convinced the chickens to leave. Well worth the 10 cents.

More proof the Gourde is worthless. Unless you have an early morning chicken problem.
at Thursday, October 26, 2006